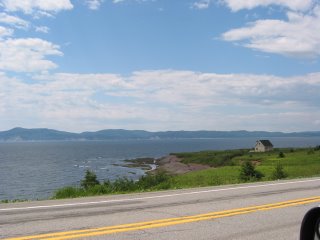 Ideally I should have found a way to park the car so I could paddle the coastline from Cape Gaspé to Percé. It isn't that far and the coastline has merit for the adventurer paddler. Alas the logistical problems such arrangements entail baffle me so I took the simpler route and drove. Doing so took me around the corner and into the hills behind the town of Percé. 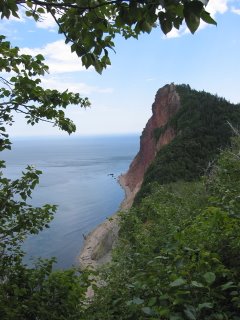 There is a scenic overlook just before the final plunge into the town which has a dramatic view of the cliff formations seen in this area. The next vista is looking down on the famous ship-like pierced rock itself: Le Rocher Percé. I headed down the hill and into the village. Before long, I'd found a camp site within easy walking of the main area of town and went looking for a suitable launching site. 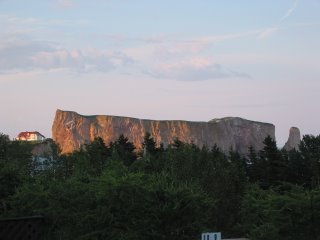 The local kayak rental outfit in town launched their boats over the concrete sea wall onto the beach about 4 meters down via a half finished wooden ramp. They were full of informative advice and very willing help me, but I like to do things my way, as usual. The owner of the camp ground suggested trying the next little town along the coast called L'Anse à Beaufils where an artifical harbour and beach existed. I drove the 9 km and checked it out. It was my kind of place, quiet with parking near the water's edge, with an easy carry to the water's edge.
Returning to Percé, I played the tourist visiting the shops selling all sorts of stuff that tourists seem to want. I wandered out on the pier and inspected the whale watching boats and a very heavy duty, built-to-take-anything rescue launch owned by the Coast Guard. Discovering a place with internet access, I sent off a few notes to friends and family and checked into how the other kayak adventurers were doing: Wendy had finally managed to get off her beach in Lumsden before the town forced her to pay taxes incurred during her long stay, and Rotem had zipped through Iceland's west-fjord country and was barreling down the north coast. 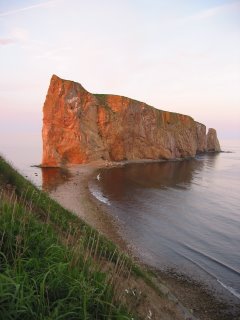 In the evening I again played tourist and caught a few pictures of the Rock in the fading light. 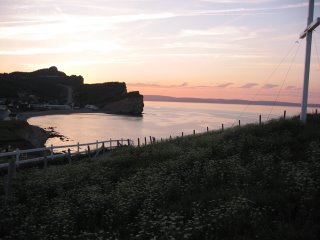 I love the photographs with the kayak bow in the foreground, I have a couple of friends who always try to get it out of shot. but to me it is a memory of what you were doing at the time, and that is hopefully having a good time! love the rock catching the light,
have a good paddle tomorrow.

Greatest travel log pictures from up there that I've ever seen. Thanks.