My brother and a long-time friend are British vintage car buffs. For several years they have dreamt of attending the annual British Car Show held on Prince Edward Island (PEI), and this year, both having fairly reliable cars, they decided it was time to make the long trek to the Maritimes. By brother drove his 1960's Austin Healey Sprite, now restored from it's days as a race car 35 years ago when he first acquired it. 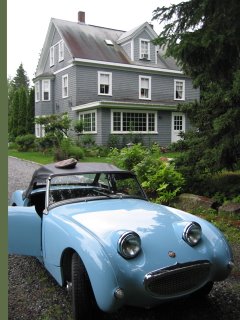 His friend, Bruce Fowler's car was a Morris Minor 1000, again the result of a caring restoration job over several years. 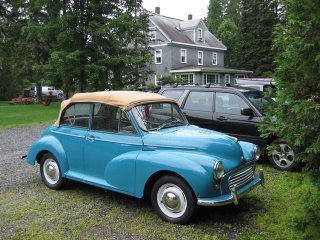 I took my trusty Toyota Matrix and my QCC 600. My job was to act as back-up vehicle, beer wagon, parts depot and so on. I was also expected to provide doses of general 'bon vivant' type humour should the occasion require it.

Our route took us through the mountains of northern Maine, down to route 1 along the coast and from there into New Brunswick. We made a short stop at the Canadian home of US President F.D. Roosevelt on Campobello island, then crossed over to Deer Island and finally to the mainland. On the Deer Island ferry, the operators got excited about the old cars and invited us up to the wheelhouse to chat. The tidal action was very interesting to see from that level, the change in water levels and currents being very evident in the narrower channels. Seeing how the ferry was run was also very informative as the pilot could manipulate the dual controls which ran the fore and aft propellors, both of which were able to swing in a 360° arc independently of each other. 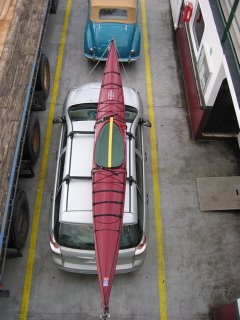 We arrived in PEI in time for the Show's opening dinner held outdoors on a magnificent property, surrounded by an amazing variety of English cars dating from a 1926 Bentley to a brand new Lotus mid-engined beauty in brilliant orange paint. We were quickly made aware of the famous island hospitality and friendliness, not to mention the fabulous food, much of it fresh from the sea. 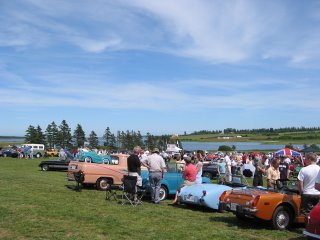 The show itself began the following day in gorgeous sunshine on a gently sloping field overlooking one of the many inlets from the Gulf of St Lawrence. I took off to the harbour at North Rustico for an afternoon of paddling.


I was interested to discover that people there remembered Wendy Killoran's quick visit the previous year during her paddle around the island. I also spoke to some folks at the Outside Expeditions shop located right on the water, thinking they would be a good place to return to some day for help in planning a longer paddling trip should the occasion arise. Again, friendly island hospitality was everywhere. 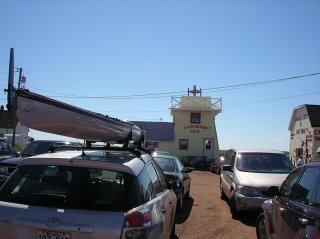 I headed out through the channel, passing some surf breaking on the shallows at the entrance, then paddled out into the Gulf and made my way westwards to have a look at the red cliffs I could see in the distance. 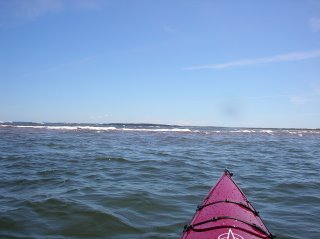 The water was a comfy mix of swell and wind-driven waves. I paddled up wind, and down swell so had to keep my wits about me as every now and then a steeper than usual blob of water came my way in an attempt to see me flailing through a bracing maneuver. I paddled along the coast, admiring the deep red cliff formations, caves and period houses perched above them until I was nearly within sight of Cavendish, home to 'Anne of Green Gables'. Only a few other kayaks were out. I had assumed there would be plenty of company, but not so. I had the ocean nearly to myself! Only a single and a double were seen that afternoon. 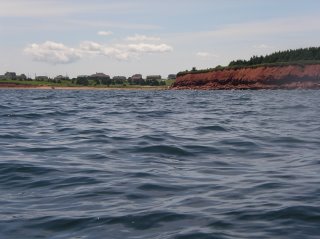 Another terrific meal was provided that evening, again outdoors, under a large tent. My brother discovered he'd won a prize for the best Sprite in the show.
Posted by Michael at 1:50 PM

Cool. Having come of age in the UK in the 60s, the picture of the Sprite and and the Morris Minor bring back many happy memories.

nice cars, sounds like you had nice paddling. I've an old anas acuta needing some bodywork done if they've run out of projects. . .

Gee, Claire, your Anas Acuta is a highly desired boat in certain quarters over here. Keep it well hidden if you're not using it and I'll pick it up whenever I'm in your area! ;-)
As for the old cars, it's amazing to see so many happy people enjoying their old British cars. Everyone smiled as we drove by!

Nice blog post! Thanks for intesting info! More Austin-Healey can be found at http://www.auto-portal.us/