Newfoundland, Accordions and Me 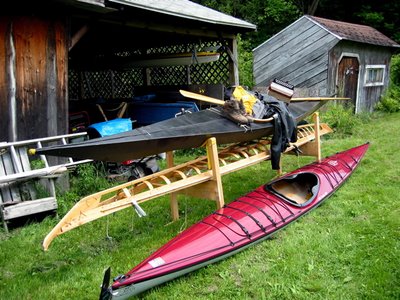 I feel I should be practicing my button accordion playing if I'm headed to Newfoundland in August. I've got all my boats and other gear together as you can see in the photo above. I suppose I should get the cover put on my 'cheater' frame, but it's got some problems and I continue to procrastinate rather than solve them. The accordion story is interesting however, so I'll tell it first.
Years ago, after a hard few days chasing some walrus with some Inuit in Northern Foxe Basin, wet, tired and bedraggled, I found myself in a cabin on a gravel beach in the small town of Sanirayaq, Nunavut. The house belonged to some relatives of the guys I was out hunting with, so even though the place was vacant at the time, we moved in and made ourselves at home. Due to lousy weather and the need for my friends to do a little socializing, we stayed for several days, long enough for me to start getting bored with village life. The only entertainment I found was several reel-to-reel tapes of Harry Hibbs playing Newfoundland style accordion. I thought the sound was awesome and nearly drove the others crazy playing the tapes endlessly. There was something about that style of accordion music that hit home to me.
A few years later I was teaching in Kuujjuaq, Quebec, and went for a walk to the post office with a fellow teacher. He was desperate to get some new boots he'd ordered via a catalogue store in the south. Sure enough, a large boot-sized parcel was in his mail slot. He happily collected it and we headed back to his place to try them on and have a bit of tea after working so hard all day - we were teachers, after all!
Opening the parcel, he discovered the boots had somehow been switched, no doubt by mistake, for a button accordion. Checking the catalogue numbers and the bill showed the store had somehow managed to mix his order, so that his $30 boots had now become a $200 accordion! Furious with the mix-up, he was all set to return to the post office and fire off a nasty letter demanding the store smarten up and send his boots special delivery on the next plane out of Montreal. Winter was upon us and his feet were getting colder by the day.
Recalling my fondness for Harry Hibbs' music, I suddenly realized this was my chance to buy an accordion for $30, save him the trouble of returning it and become an accomplished musician all in a single blow! The deal was struck.
During the next few days, I enlisted the help of several Inuit friends, who could play, to teach me a few tunes and I can still play them. The tunes are fast paced pieces, good for dancing in the style popular back then in the small northern Quebec Inuit coastal villages. Mind you, they are the only tunes I know on the accordion, but having been brought up the Labrador coast by Newfoundlanders during the days of the fur traders, they'll be perfect for my trip in August!
Now, 30 years later, I still don't even know the names of any of the tunes, but I have played them for years to my classrooms of children, who, of course, thought I was Harry Hibbs, reincarnated. Maybe they'll think so on the Rock as well. Or maybe I will be taken out in the bay to be submerged quietly in the dark, cold waters, while the fog drifts about hiding the dirty deed from onlookers. That's why I'm going to take along my Reed suit to wear while I'm playing, just in case I need to swim back to shore after I untie the rocks attached to my feet...
Posted by Michael at 1:34 PM

Will these blogs do audio? Oh lord, the damage I could do...