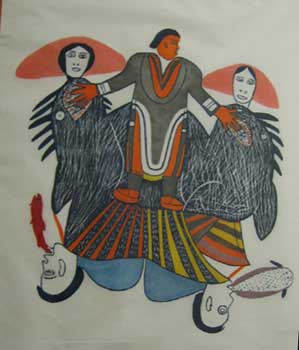 There was an 'assisted suicide' in a town nearby the other day: a man over-drugged his ailing wife who had begged him to end her pain. It's got me thinking of my friends who lost their son to suicide last Spring. They are slowly putting their lives back together, although obviously, one's life never returns to what it was. How could it? There will always be that hole in their hearts, the unanswered questions, the empty chair, the missing smile. Still, life seems to keep moving, they go through the motions and as time goes by their memory of him seems to change and heal. It's almost as if he has gone away somewhere and won't be back for a while.
I guess we all live with memories of the past, things we want to have back, things we wish we could change if we had the chance. And sometimes that chance does come, even for those involved in assisted suicide.
When I lived in the arctic I made an extended trip by canoe to Baffin Island to hunt caribou. It was in the season when their fur was the right length for making clothes, the period just after the spring molt and before the hair grew to its longer winter length. Along the way we stopped at an island where there were ancient Thule Culture subterranean houses and I was anxious to see them. These people had had boats and hunted whales, and were the fore-runners of today's Inuit culture. On arrival I was surprised to discover camped on the beach an older man and his young wife and family. It was confusing to meet them. I thought I knew everyone in the area, yet only the man's young wife and her children were familiar to me. I had stayed overnight once with her and her young children about a year earlier. Her kids had taken me out egg collecting in the fog the following day and astounded me with their visual acuity. Why had no one ever mentioned the older man and his grown-up sons? Where had they been when I'd visited their camp the year before?
Immediately I could see this man was a special person. He was 'inumariq', a 'real inuk' as people would say back then, because he lived in the 'old way' like people had done years ago. His sons, all in their late teens and early twenties ran to his beck and call. He sat on a white bearskin rug when steering his large freighter canoe, his tent was much larger than anything I'd seen in the area. Food was everywhere. His dogs were numerous and well fed, even in summer. This man was living big! But who was he? Why had I never met him?
In the weeks that followed our visit to his camp, I learned his story. Years previously, when most people lived in small hunting camps scattered far from each other and when everyone's survival depended on close mutual cooperation and support, a difficult situation arose. An elderly man, one of the leaders of the camp, realised he was sick and becoming a threat to the small group. He became afraid that he would go mad and do something to harm the others in the camp as his pain increased. Quietly he talked several of the other men in the camp to assist him. He got them to load a gun and place it in a way which would enable him to pull the trigger. They reluctantly agreed to help after initially saying no. They knew they had no choice.
For some time nothing was said, but eventually the story of the old man's death got out. The men who had assisted him were tried and the man I had met was found guilty. His sentence was a life-time banishment from the village. He was permitted to make a supply trip only once or twice a year. On one of those trips he had married the young lady I had met and this arrangement resulted in his having a family composed of grown up children from his deceased first wife and the young children who'd collected eggs with me.
To meet this group of people was to go back in time and see what life in a self-sufficient Inuit hunting camp must have been like years ago. It was tempting to think it was a better life, but that was also an illusion. His family, especially the younger ones, were being lost to the changing world and being left behind their peers in town. When they got to school age, the banishment was lifted, but the old man and his sons spent much of the year in their traditional camps whenever they could. He didn't care for the new memories and stayed in the old ones, living the way of his forefathers.
I'm sure my friends will revisit their past as well and think of the happier days when their son was young and full of life. I think they are learning as well to accept his decision to depart this world and his desire to seek something better in another. It's sometimes hard to accept what others do, but often there's little choice left to us. We just have to accommodate, accept and move on. Well, some of us, at least. Some can have it both ways like 'inumariq'.
Posted by Michael at 9:46 PM