I'd hope to paddle around Prince Edward Island's three 'corners' on my recent trip, North Cape, East and West Points, but generator problems on one of the cars meant I wasn't as free to travel around as I'd hoped. Taking some advice from Outside Expeditions as to which cape might prove to be the most interesting paddle, I headed to North Cape on the northwest tip of the island. 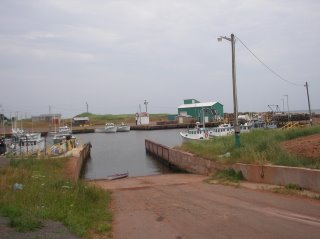 I put in at Seacow Pond, the closest spot to the Cape with easy access to the water. It's a commercial fishing harbour with a steel walled entrance to the ocean. With an east wind blowing it was a bit tricky exiting without banging into the walls. Once outside, I had to really dig in for a few hundred yards until I found deeper water and easier waves with less reflection off the harbour walls. Once there I turned westward to the Cape. The cliffs here are moderately high, perhaps 30 to 40 feet off the water, a deep red with highly convoluted sculpturing from years of wave action. I made good progress westward along the shore with a healthy swell coming in under my stern and a quartering breeze on the starboard side. 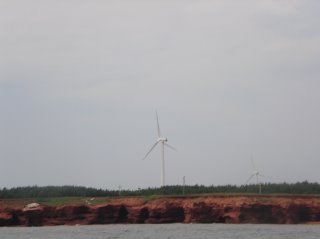 I began to notice the windmill farm built to catch the winds on the cape as well as the Interpretation Center building as I got closer. I understand the windmills generate electricity to produce hydrogen through electrolysis. Seems like an odd arrangement, but then again, hydrogen is a good, clean source of energy when it's burned as fuel. It still seems odd, however. 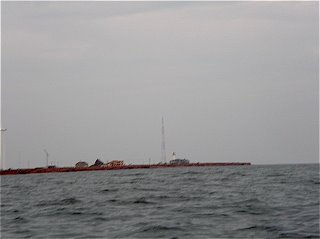 The closer I got to the point, the bouncier the seas became, perhaps due to the water getting more shallow or the action of currents swinging in the the west. Paddling in an empty boat only increases the action when it's wavy and I found it difficult to operate the boat, paddle and camera simultaneously! I continued on determined to round the Cape and at least have a look at the western shore, regardless of the growing waves and confused seas I was encountering. Finally, the cliffs broke into a few stacks and I could see the red cliff walls heading southward. I had passed the Cape!

With the breeze now rapidly becoming much stronger, and breaking waves appearing on both sides of me, even some distance out from the shore, I decided it was time to head back. Fortunately, I find the QCC an easy boat to bring into a turn even in rough water, so I quickly swung around and faced the waves I'd been surfing down only moments earlier. I actually like paddling into large waves and this was no exception. I like easing my way up the slope and then digging into the crest just as the bow goes over the top. Then I pull hard for a few strokes down the wave back and repeat the process, letting the boat and the wave bring me up to the next crest. My only concern was I seemed to be angling inshore and was obliged now and then to head out parallel to the waves, which is a lot less fun than charging into the waves straight on.
A couple of hours later I surfed in on a wave slipping neatly between the outer harbour walls, made the 45° turn and slid into the calm waters inside. A fun paddle! 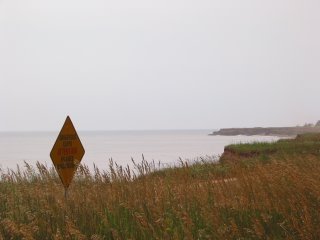 Once the boat was back on the car, I drove up to the Interpretation Center to have a look at where I'd been. I was surprised to see the line of surf extending a long distance out. I had seen some of it from the water, but had not realised how extensive it had become in the now much stronger wind. Perhaps the tidal currents were having more of an effect as well since I'd been out there.
I drove back to Cavendish, where I was staying, keeping the coast in sight when I could. The more of the coast I saw, the more it beckons me to return to paddle it's full length. I stopped and met Anne Murray at her kayak rental site on Malpeque Bay and we chatted in the wind for some time about people we knew who'd paddled around the island in years past. We could have spent the rest of the day telling stories, but she had to leave to pickup a group out paddling before the winds pushed them completely out to sea.
Posted by Michael at 11:52 AM

fun, I always like the part where you hit a wave square on and it wooshes striaght into your face and down the neck of your waterproofs. ha.
sounds like you're wanting to go back there to paddle sometime.
I think the windmills are used to create the hydrogen as it can be stored and used consistently but the electricity from the wind farm can be off or on depending on the weather. we are getting more windfarms round scotland, good I say, folks complain its spoiling their view but if theres no oil left they arent going to be able to drive there to look anyway.

Yep, Claire's right, it takes quite a bit of energy to produce "normal" hydrogen, usually fossil fuel energy which kinda cancels out the benefits..
Using wind power instead to crack the H2 seems to be a win/win, unless you're a migratory bird or a sensitive neighbour.
Great pics, and I hope you make it back Michael!