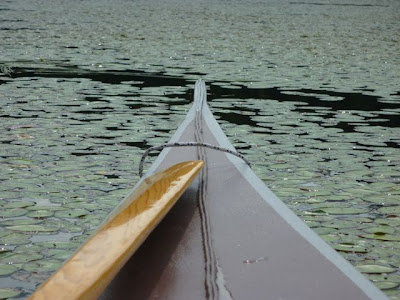 It's probably a truism that one tends to seek adventure farther from home than closer. Such has been the case with most of my travels which have taken me wide and far. That changed this past weekend when I loaded up all my kayaks, yes the four of them, and together with two other couples, headed to Parc Frontenac only about two hours from home. I'd never been there before, so I was primed for adventure! 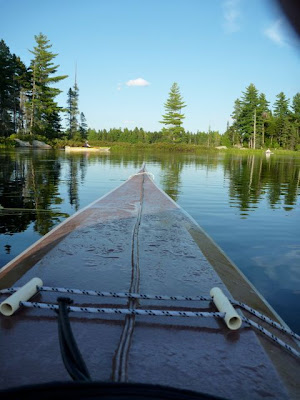 We spent the first day paddling on Lac Sauvage. There were loons and mergansers swimming around and some bald eagles keeping on eye on our technique from lofty tree perches. I paddled my skin-on-frame for the first time this year. It was a tighter fit than I remembered. What can that mean...? 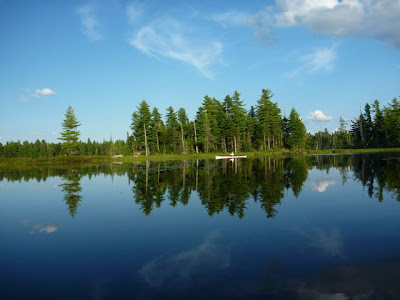 Lac Barbeu was next on our list. It's seen in the two photos above. It's a eutrophic lake meaning it's silting up and nearing the end of it's life. In time, it will become a marsh, then slowly dry out as forest cover begins to invade. The most obvious feature for me was how hot the water was! I didn't have a thermometer, but it was very bath-water like in the shallower bays. 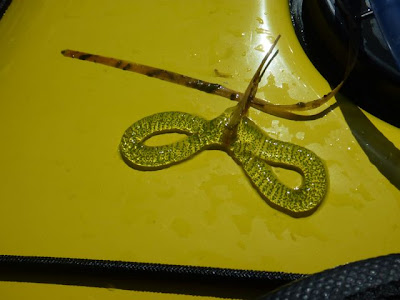 The last day of our visit, we tried out Lac Des Isles. True to it's name, it was dotted with islands as well as rocky gelcoat scrappers hidden just below the surface. I cringed each time one of my friends added another scratch to the bottom of one of my boats. Mind you, I scraped quite a lot of paint off the bottom of the SOF, so I guess I shouldn't complain to vigorously! The most interesting find was this thread of algae encased in gelatin-like material. When held up, the tiny green algae formed a spiral through the gelatin. It was a beautiful work of nature!

Like many of the SEPAQ parks in Quebec, we found it both expensive and clumbersome to camp in Frontenac. For example the base fee is reasonable (~$25), but then you get charged to make a reservation, another daily fee to enter the park, more for the showers and so on. By the time you've paid for everything, the price is over $34 per day. A similar facility elsewhere would cost almost $10 per day less... . Wilderness sites feature several camping spots connected to one common facility which can be great if your group takes all the sites. Otherwise you will find yourself sharing with strangers who may or may not be like-minded. When they're not, it isn't much fun...
Posted by Michael at 8:48 PM 4 comments: