You're right, the picture is missing. As soon as I get permission to post it, I will. If you really, really need to see it before you begin reading - or during - then click 'here'. It won't take you exactly to the picture, but scroll down a bit and I think you'll see which one I want to use...

Ever since I started writing this blog, I've shut the office down at Christmas, doubled the staff's pay and told a Christmas story. This year, even in these tough economic times, I've been able to extend this gift again. I hope you'll enjoy this year's offering! Thanks for reading and Happy Holidays!

Out of the corner of my eye I saw Tumasi close the door to the trailer classroom building where he taught and start to head over to where I was in the main school building. I turned and watch him as he made his way to the school door. I was thinking about how our lives had slowly come together. He'd been born in a sod house out on the tundra and I'd been born in a hospital in a southern Canadian city. So far apart and now here we were together. We were the same age, teaching the same grade and spending our weekends hunting and fishing out on the same landscape.

The door slammed shut and I could here him speaking to one of the teaching assistants in Inuktitut. He was excited. He'd got a call from the post office. A long awaited parcel from Sears had finally arrived after several delays. His footsteps were silent as he made his way down the hall to my class, but his excitement told me he was at the door.

"Johnni-ai!" He spoke the common greeting style in the Inuit culture of northern Quebec. I smiled.

"Ya, finally my boots are in. Can't believe it's taken so long. I thought I'd be going hunting barefoot this Christmas!"

I looked down at his feet. He was wearing beautiful homemade kamiik, sealskin boots his aunt had made. Everyone in the community wanted a pair of those boots and Tumasi wanted Baffin skidoo boots from Sears. What a crazy world!

"Ya, right. You look barefoot in those kamiik. Real shame to have to cut your frozen feet off, especially at Christmas. It might keep you working regular hours though, without those fast moving feet…!"

He smiled. He knew I was always bugging him about his 'just-in-time' style of working, never wasting a moment in school that he could spend on his skidoo out on the land.

We headed to the post office and picked up the boots. I was a bit surprised by how heavy the box seemed to be, but decided not to say anything.

"Come over for some tea." Tumasi said as we exited the building. "We'll see how these beauties fit!" We strolled down the snow covered main road through town. I noticed they'd raised the price of gas again at the Coop. It was $0.75 a gallon! Incredible! It just keeps getting more and more expensive these days. I was glad we didn't have cars in the North. Can you image running a car with gas at that price!

I couldn't believe how long it took Tumasi to finally get around to opening the box and trying on his new boots. He made tea, we ate some dried caribou his cousin had dropped off last weekend and then Tumasi decided he wanted to change all the lights on his Christmas tree for ones that blinked on and off. Better his place than mine, I thought. Blinking lights? Oh gawd…

The wrapping on the boot box seemed to be tougher than steel, but Tumasi finally took his pocket knife to it and off it came. In shreds. Next the box itself, which proved to be a bit easier. He raised the flaps and looked inside.

"Waaaa…?" I looked in the box. It was full of light blue foam peanut-like things. Tumasi shoved his hand into the peanuts and felt around.

"Aaaaaaiiii…? What the…?" He pulled out a Hohner button accordion! Shiny, red, and so not boot-like!

"Did you order an accordion boots?" I said, pretending to be shocked. Now Tomasi can't play an accordion. In fact, he can't even hold a tune as far as I knew.

"Are you kidding?" He fished around in the box as if the boots were still down there hidden somewhere in the peanut pile, but of course they weren't. "I don't believe this! An accordion? Where are my stupid boots…? Sears! What idiots Kabloonat are!"

"I tell you what. Let's trade boots. You can have my boots and I'll take your kamiik." I lived in hope although his feet were smaller than mine by a couple of sizes. Maybe I could get them stretched...

"No can do, friend. My aunt would have me stretched, dried and sewn into a parka if I did that."

Tumasi was clearly confused about the marvels of southern Canadian culture when people down there didn't know the difference between skidoo boots and accordions, but what could he do.

I left him with his problems and headed home to work on my own for a while. It certainly was a costly error on Sears' part. I checked the mail-order catalogue and discovered the accordion cost over $300 while the boots were less than $50.

At school the next day, I noticed that Tumasi wasn't wearing his new accordion 'boots', but he was smiling. "So what happened?" I asked. Here's what he told me.

"Well it turns out my aunt's husband used to play the accordion. I never knew that, but he says he used to borrow one and play one when he was young. His mother had learned to play accordion when the old traders used to come up here long ago. When he herd about the mixed-up package I'd got, his eyes lit up like Christmas lights. There's no way he could afford to buy an accordion, so thanks to Sears, he's now the owner of his first accordion. He's offered to order me some new boots from his cousin the skidoo dealer the Coop uses. They'll be in on the next plane!"

"A little bit, but he's rusty. He said with a few days of practice, he'll be ready to play again. He already told everyone there'll be an old time Christmas party in the school gym with step-dancing, just like in the old days. Pretty cool, ai?" 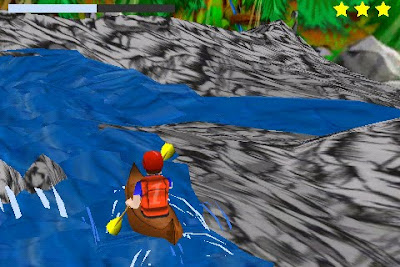 Wondering what to get for the kayaker you know who never actually gets out on the water, but loves to tell stories of the wild times he/she had? Well, if they have a iphone or ipad, then here's just the thing. iKayak! Silly, but it did help pass the time for a while on that 15 hour to and from flight to Asia I took recently. All the fun of the real thing without getting out of your seat, changing into a drysuit or wondering where the take-out is. Just start edging your craft and the rest is taken care of!
Posted by Michael at 10:01 PM 3 comments:

The Search For Franklin 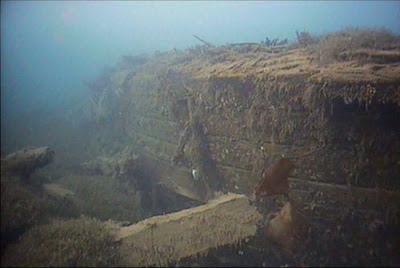 You cannot be a fan of all things arctic without wondering what happened to Sir John Franklin and his two ships, the Erebus and the Terror. Despite years of searching, very little in the way of remains have ever been found which is odd considering both ships contained locomotive steam engines which surely would show up on some kind of sensor and the location where they were last known to be is recorded in the only document found.

This past summer, yet another group, Parks Canada, went looking for the ships, but again, to no avail. They did find a ship however! This one was a bit easier to locate as detailed records were kept locating where it had been abandoned in 1854 by Captain Robert McClure and his 66-man crew. The ship was the HMS Investigator. The ship had been locked in ice after wintering twice in a dead end bay finally forcing McClure and his crew to abandon the ship and leave behind a cache of equipment and provisions on the shore. They made it to safety eventually and returned to England bearing the sad news that Franklin remained lost. 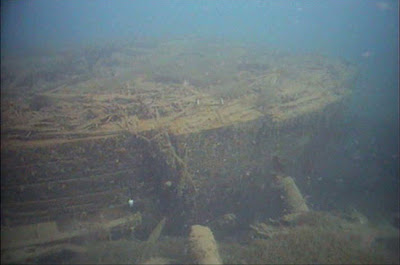 This summer's search has produced some remarkable photos of the Investigator as she lies upright on the bottom of the shallow bay where she was abandoned years ago. As the area is now part of Aulavik National Park, one might assume that kayaking trips will soon be organized to visit the wreck and go diving on her... Well, one can dream, at least!

Image sourse: http://www.pc.gc.ca/eng/culture/expeditions/introduction.aspx
Posted by Michael at 9:04 AM No comments: