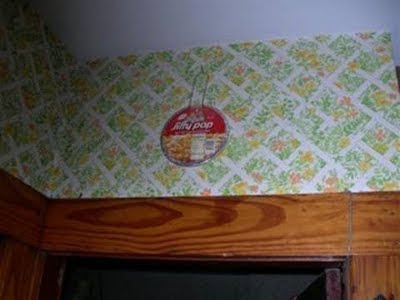 I've always been a bit leery of smoke detectors. For example, how reliable are they really? How can they work when the power goes down? Is changing the battery once a year often enough? What about the radioactive thingie? Will it eventually kill you long before the fire does?

Well, there's an safe, non electric alternative at last! Not only will it work in the home, but it carries on working when you're out camping during a paddling trip. You can even take one along with you while your camping! So what is it, you ask? I'm referring to the 'Jiffy Pop' heat detector shown in the photo above. Not only will this little baby wake you up from a dead sleep when it detects heat, it will go on to feed you while your new house (or campground) is being rebuilt. Will your old detector do that? I didn't think so...
Posted by Michael at 10:00 AM 2 comments: 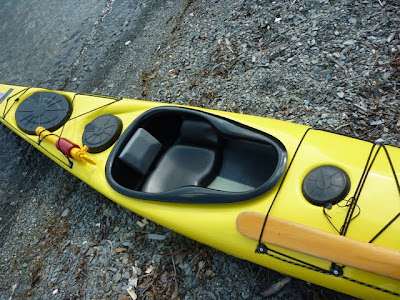 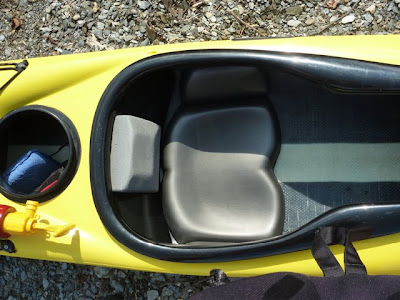 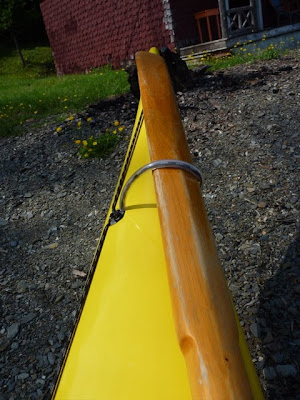 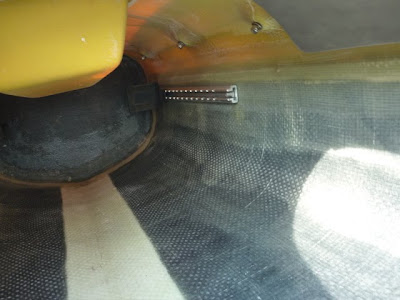 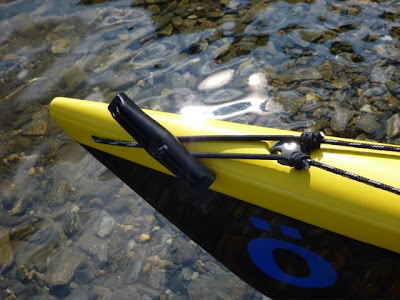 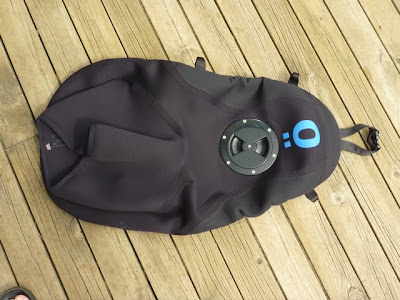 So as I near the end of the summer, I am very happy to own a Maelström Kayak Vaag. I look forward to having many interesting paddles in her!
Posted by Michael at 11:13 AM 4 comments:

Even since I got to go out in a Dragon boat in July, I've been fascinated with these multi-paddler craft. There is a thrill both paddling and watching these boats skimming across the water. A series of races was held in Sherbrooke, Qc yesterday and, naturally, I had to have a look. 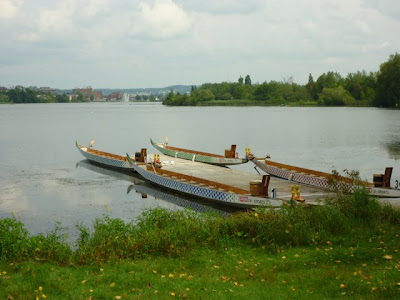 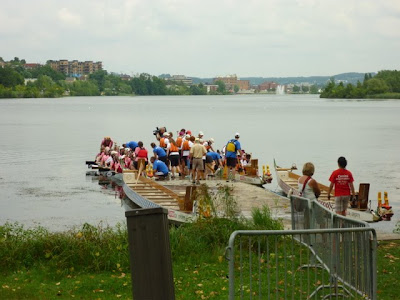 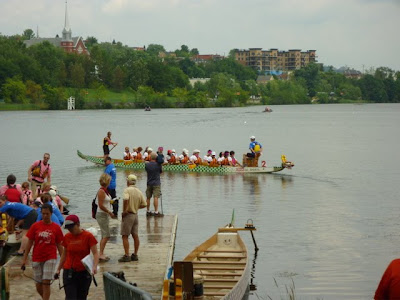 Then they're off...
I'm working on some video footage, a little collage of the races, which I'll post on Vimeo (or see the sidebar link) later when it's done. In the meantime, enjoy the photos!

Cooling Up, Cooling Down 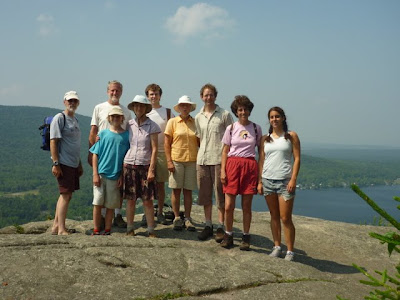 In the recent hot weather we've been aaa... enjoying (over 30°C and humid), there have been two means of staying cool. The obvious one was to get the boat out on the water and practice rolling and rescuing, standing up to paddle, parading on the aft deck and so on. It was never long before one ended up more in the water than on it.

The next preferred cooling technique was to go climbing. In the photo above friends and family took a post-wedding (my daughter married her beau on the weekend) hike up a local hill called the Pinnacle where we caught a welcome breeze and a hazy view.
Posted by Michael at 3:51 PM No comments: 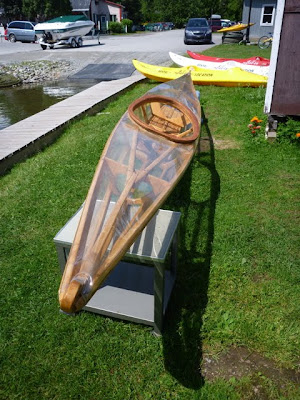 I suppose one way to learn to become 'one with your boat' when out kayaking, if to have a see-thru deck and hull. Thus when the instructor says something like "Bring your lower knee up and push the deck" everyone will be able to see exactly what is being asked of them. Getting that transparent boat has always been a problem until recently, but not any more. 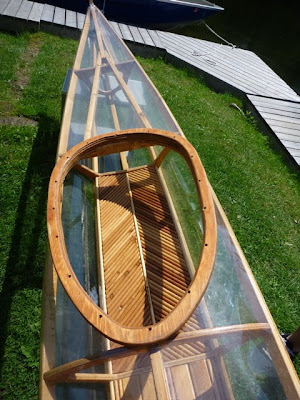 A local company called 'Appalaches' can provide you with a custom sized SOF style kayak covered in heavy clear plastic. Built somewhat like those designed by Yost, the boats have a distinct look on the water. I haven't tried one, but I understand a few have already been sold. Not recommended for those who like to paddle naked...
Posted by Michael at 7:30 PM 2 comments: 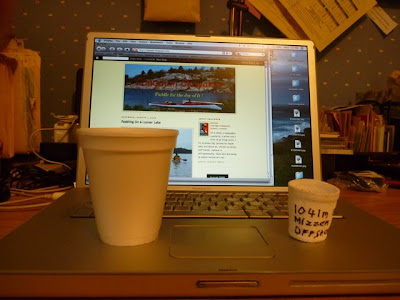 While in Newfoundland last month, I went paddling with a fellow who works with remote underwater robotic devices, usually in connection with offshore oil rigs. The job offers him a number of interesting opportunities one of which is pictured above.

The styrofoam coffee cup on the left is your standard sized cup most people are no doubt familiar with. The small cup on the right used to be standard size, but my paddling friend took it on a deep dive. As you can perhaps see, the cup went deep: 1041 meters deep off the site known as the Flemish Cap, southeast of Newfoundland. It survived the ordeal, but got the air punched out of it. Makes me thankful, kayaking is a surface water activity for the most part!
Posted by Michael at 7:29 PM 3 comments:

Paddling On A Looner Lake 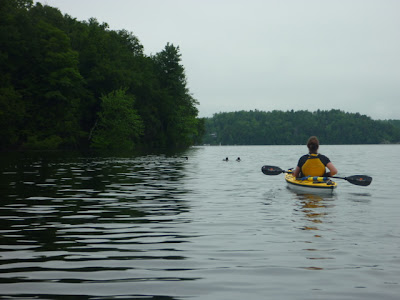 I was out paddling yesterday with a friend of mine and we discovered the lake was nearly awash with loon activity. Here's a photo of a few of them heading our way to check us out... 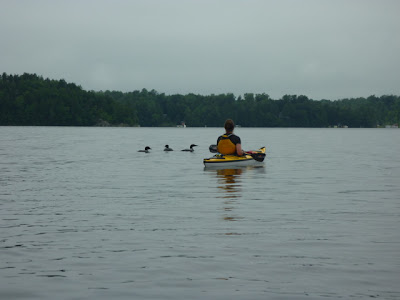 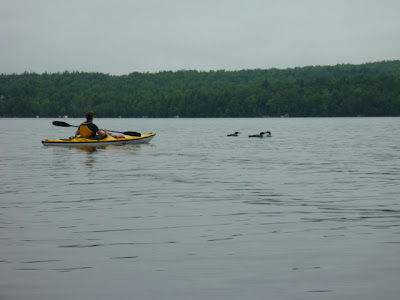 ... and then, finally satisfied with our choice of kayaks, off they went to see what else was happening on Looner Lake!
Posted by Michael at 7:12 PM No comments: