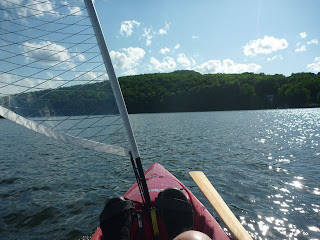 Today marked the first day since installing the new larger rudder on the Hobie Rev 11 that I got out with all three methods of propulsion installed and ready to go. I left the dock under peddle power, then once out in the fairway, the sail took over. When the wind died or slackened too much for my liking, I peddled in the desired direction until the wind took over again.

This went on for the remainder of my two hour outing. Very pleasant way to pass the time and get a bit of exercise as well. The wind got rather gusty towards the end of the day and several times I had to sharply round up into the wind to avoid spilling into the water. I suspect she doesn't roll all that well with the sail up...! The new rudder provides that extra control needed to avoid sudden swims, which I don't really need as the water is still chilly in places.

I didn't use the paddle at all in the end. It was more of a security backup than a means of propulsion today. Besides, I have 'real' kayaks for paddling. Which reminds me I'd better get back into them before I lose my skills! But this Hobie is just too much fun...
Posted by Michael at 8:36 PM No comments: 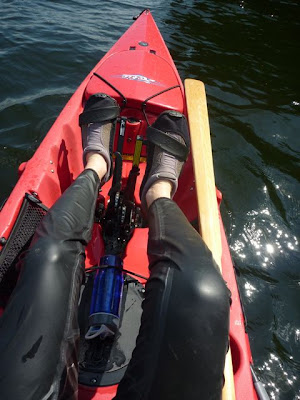 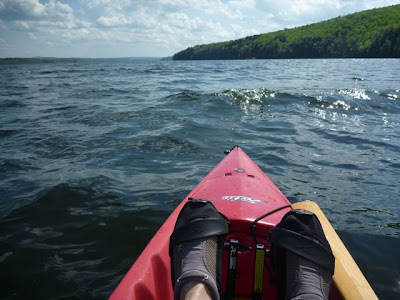 I'm still waiting to try the sail rig. Hopefully the winds will be in my favour soon!
Posted by Michael at 1:51 PM No comments:

Paddling the inner harbour of Cape May produced a surprise the other day. The high winds and extreme tidal currents in the area kept me off the open water for the day, so harbour exploration became the route of the day. Passing the lines of docked yachts and their adjoining condos, I suddenly found this surprise... 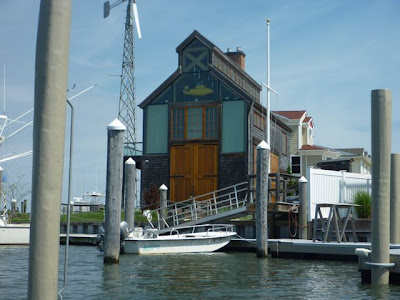 Surely an innovative house like this one, nearly all of glass panels some opaque, some not, with large doors permitting the entrance of one's submarine, a wind-mill for self-sufficiency and a cheeky little yellow submarine hanging in plain view from the rafters, has to belong to Capt Nemo or his alter ego!

Not all kayaking thrills are found in the tide rips!
Posted by Michael at 9:28 AM 1 comment: