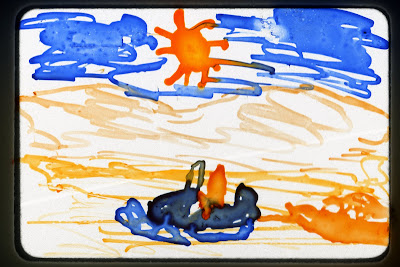 It had been the best fall ever for Siasi Putayuq. He had found a job working on the communities water delivery system. Best of all he was driving the truck and not working the hoses at the back. It doesn't get better than that, especially when winter temperatures dropped to -30°C and lower.

With some money coming in at last he put in an order for a brand new skidoo, one of the top models. No longer would he have to drive a fixer-upper and spend most of his weekends working in his tiny shed repairing one thing or another.

By late November the river finally froze over, late again this year… Siasi was anxious to cross the river and head off to Tassuiyuq and do some fishing. Most of the nearby lakes and streams on the town side of the river were pretty well fished out. There were just too many people to feed with the town growing the way it had been for the last few years. Anyway, the big weekend came and all week long people were testing the ice to see if it was safe to cross. The word was that by the weekend, the first party of fishermen would head off and Siasi was going to be with them.

About ten snow machines were ahead of him, but he didn't care as they left the shore and ventured out on the ice. Snow covered for the most part, but a few ice patches were scary. Still no one slowed down, they just kept on the throttle all the way across and only the tidal ice gave them any difficulties. The jumbled blocks of snow and ice caused where the tide rose and fell was always a problem until the worn track was created. This year was no different, but finally all the machines were up on the land and heading for the lake.

The fishing was everything they expected. With no one there fishing for several months, the fish were hungry to be caught. By Sunday evening most people had filled a bag or two full of fresh, frozen trout tied on their kamotiks made the long trek home. Siasi and a couple of friends couldn't tear themselves away. It had been so long since they'd been out on the land, they wanted to squeeze every last second out of it. Finally, the brief sunlight already gone, they loaded up and followed in the tracks of those already departed. They made a stop for tea about half way to the river and then another to tighten the sealskin lines holding the sacks of fish on the kamotiks. As they swept over the last hills before the river banks itself, they suddenly halted. The ice had broken up leaving large stretches of open water between them and the village on the opposite shore… 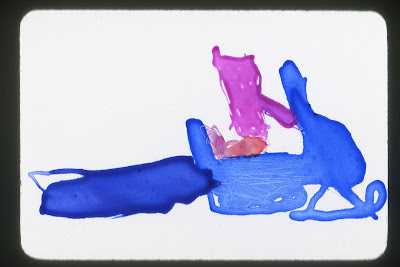 The ice must have broken up with the last tide as the snow-machine tracks headed right down the tide ice and out onto the last remaining ice. No tracks led either up or down the river. Just as they were about to head up river to see if they could cross further up, lights could be seen coming down to the river on the opposite shore. As they watch, it seemed that someone was launching a boat to come across for them. Siasi breathed a sign of relief! His job would be there in the morning. He didn't want to lose it so soon after he started and his precious skidoo was only partly paid for!

When the boat approached the edge of the ice, Siasi was shocked to see it was a member of the village Qajaq Club in his qajaq! After learning that it was the only craft available, the larger boats having been hauled away from the water weeks ago, Siasi managed to lay down on the rear deck and hang on as the qajaq carefully made its way to the far shore. Other than getting his mitts wet, he managed the trip remarkably well. Within a short period, all the stranded men were safely back on the village side of the river.

I wasn't long before the boat was across the river and Siasi and his friends had grabbed the bow line as it was thrown to them. What became clear as well, as that while they had been rescued, they would have to leave their snow-machines behind. The boat couldn't take them. Still, Siasi reasoned, in a few days the river would freeze over again and probably by next weekend he'd be riding once again!

However, the river ice and the tides had other plans. As it dragged into December and came closer and closer to Christmas, the river would freeze and then break-up, freeze again and break-up again. One weekend, Siasi and his brother went far upriver looking for a crossing place, but found nothing they considered safe. Things were getting more and more depressing. It was especially frustrating when he made his monthly payment on a machine he could even see, let alone use!

The week before Christmas a poster was put up in the Coop store advertising that the new helicopter company in town was going to raffle off a Free Christmas Helicopter Ride. A $2.00 ticket would raise money to win the ride and the money raised would go to building a new Fire Door on the community hall where weekly movies for the children were held. Siasi bought a ticket. He couldn't afford to pay for a helicopter to fly over and pick up his skidoo, but if he won, he'd use his Christmas ride to pick it up and his friends' machines as well.

At the end of the week, on the day before Christmas, everyone crowded into the Community Hall to see the winning ticket being drawn. The mayor reached into the pot and handed the ticket to the manager of the helicopter company. He read out the name. He didn't hear the name very clearly, but it wasn't Siasi, that much he did know. Oh well, he thought, the river will have to freeze sooner or later. He'd just have to be patient. He looked over that one of his friends who also had his machine stuck across the river. He looked back and shrugged then walked out of the Hall.

Christmas day arrived and still the river ice wasn't safe to travel. Around one o'clock in the afternoon, Siasi heard the helicopter taking off. That must be the free ride people getting their free ride, he thought. He turned up the TV to block out the noise. It didn't really matter, helicopters, especially ones that you really wanted to be on, have a way of intruding into your head whether you want them there or not. He could hear it on one side of the house, then it would disappear for a minute or two, only to return again on the other side of the house and again disappear this time for a bit longer.

Just as he was about to get up and turn down the TV, the noise returned and this time it seemed to be right over the house! Was it going to crash on top of him? That's all he needed! The noise was deafening and forced him out of the house to see what was going on. As soon as he stepped out he was caught in the downwash from the rotors, Siasi scrambled away from the house, practical on his knees and then turn and looked up at the crazy helicopter hovering over his house. There, in a sling under the skids hung his skidoo! The chopper moved slightly sideways and lowered the machine gently to the ground, placing it a few feet from his shed.

Siasi rushed over and untied the sling allowing the helicopter to lift up and head back to the river on its way to pick up the next snow-machine. As Siasi turned around one of his friends came around the corner of the house, a big smile on his face. "Merry Christmas, Siasi" That was my uncle who won the helicopter ride. Pretty neat, eh? But…

I know, said the friend, he said he was too old to fly around in a helicopter, but not too old to help young people go fishing!

Note: The images were made by drawing directly on blank 35 mm slides with coloured ink by various people in Kangirsuk in 1972
Posted by Michael at 1:18 PM 2 comments: 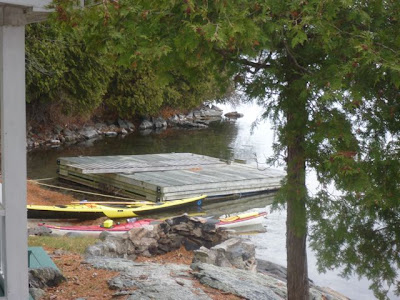 Sharbot Lake is another smallish lake in central Ontario which I visited recently. While it's mostly cottage country, with some built on islands as well, it is nonetheless an interesting paddling venue. While I prefer cottages to be old fashioned and tucked away from the water, it is of some interest to see how building tastes have changes over the years. Some reflect our growing affluance and are virtually palaces. Elaborate docks and floating rafts are all part of the cottage experience... 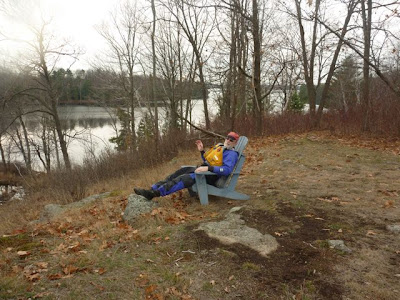 Of course, no sane cottager would not have an Adirondack chair or two out somewhere on the property for the comfort of out-of-season paddlers... 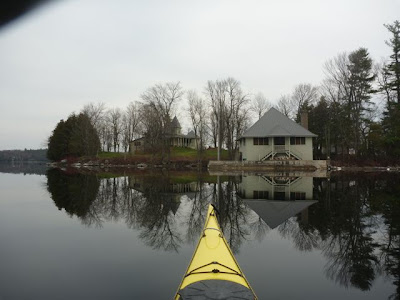 Warm weather for late November made the paddle pleasant, as did the calm waters. This island cottage appears to have been an old home which has been 'upgraded' with turrets and a fancy boathouse. The 1% builds, the 99% (or a part of them) paddles!
Posted by Michael at 11:31 AM 2 comments: