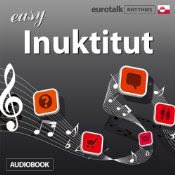 Obviously it's no secret, kayaks or qajait were invented and refined long ago by Inuit people in Canada and Greenland. Today we benefit from their skills and knowledge and use that information to produce the boats that most of us paddle in places around the world. Some of us have tried our hand at reproducing the original kayak designs by building 'skin-on-frame' (SOF) boats of various sorts. This endeavour has enabled the builders to get a bit closer to the Inuit and their way of thinking.

Now there is another way to get closer still. Learn to speak the language of the Inuit themselves: Inuktitut! The one hour audio book called Inuktitut will get you started hearing the sounds of the language and provide you with some useful phrases and vocabulary. As most SOF builders chose to build Greenland style kayaks, this audio book is particularly helpful as the dialect taught in the book is 'Greenlandic'. This dialect varies somewhat from the Inuktitut dialects spoken in arctic Canada, however there are many similarities between the various dialects (and some often amusing differences as well!). Clicking on the link above will bring you to the site at Audible.com, however it's also available from the iTunes store by searching for 'Inuktitut'.
Posted by Michael at 11:58 AM 2 comments: