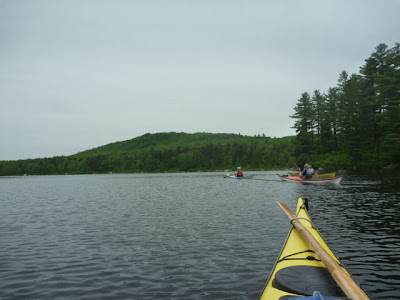 I had the chance today of paddling with a relatively new paddling group. It's called 'Sea Kayak Vermont!' and is slowly gaining more members as it becomes more well known. It's a low key, highly enthusiastic group of paddling folks who like to get out and explore some of the bigger and smaller lakes in Vermont. Today we had a look at Lake Groton located in the State Forest of the same name. We put in at Boulder Beach on the eastern shore, but there's also public access on the west side of the lake as well.

While it's definitely cottage country for large parts of the shore, there are some wilder sections, especially at the south end. There's a long stretch of shoreline cordoned off to allow the local loons to nest in seclusion. As if in return, they can be found everywhere on the lake often letting paddlers come up quite close to them, which is a rare treat on most lakes. 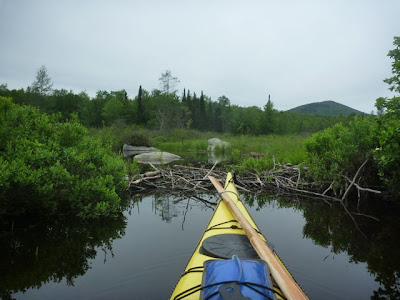 Just west of the dam at the south end is a little boulder strewn creek leading into a boggy area built by some beavers. Their dam is only about 10 inches high at the moment, but it has allowed a whole new area of marsh to exist behind it. They graciously constructed a turn-around pond just below the dam for us to retreat back out onto the main lake without having to back all the way out.

I'm looking forward to exploring more of Vermont's lakes in the coming months!
Posted by Michael at 8:18 PM 1 comment: 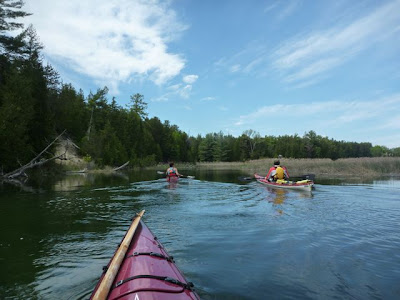 On the recent holiday weekend some friends and I went to Sandbanks Provincial Park for a little paddle. Hoping for some serious surf action, I took along my paddling helmet. Well, it was dead calm, but at least warm and sunny. We paddled along the park beach, but the more interesting paddle turned out to the the little stream which connects East Lake to Lake Ontario. 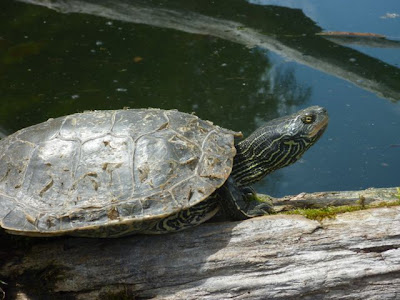 The park end of the stream is full of wildlife including birds and turtles. I have paddled up to basking turtles many times, bu this was the first time one allowed me this close before sliding into the water. I got so close to the fellow in the photo that it allowed me give it a little pat on the back. It then grudgingly slid off the log and went into the water. I guess it wasn't happy with me ruining it's afternoon nap... 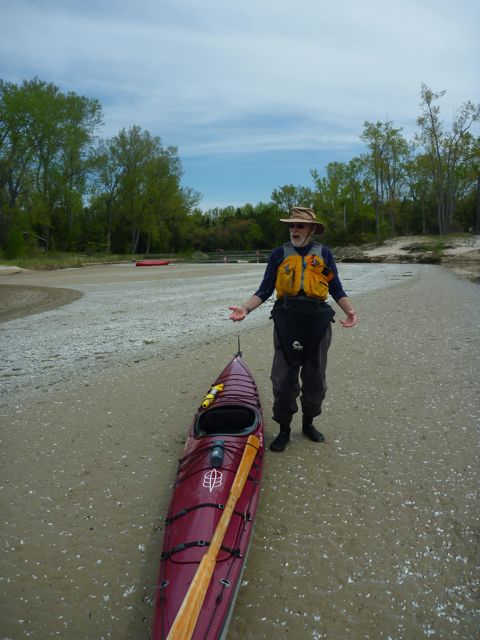 When we got down to the outlet of the stream, we suddenly ran out of water. The stream disappeared into the shoreline sandbar forcing us to exercise our portaging skills for a few meters. It appears the previous days of wave action had
Posted by Michael at 11:28 AM No comments: 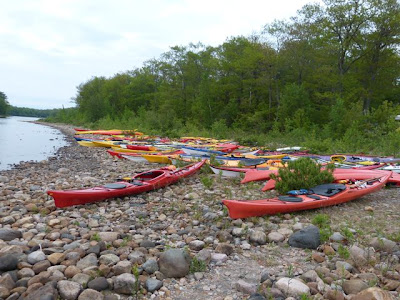 Look to your right... 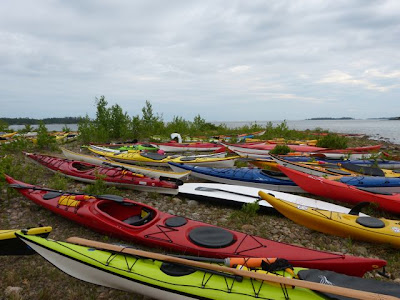 Look to your left...

Everywhere you look, paddlers are getting ready for another summer of paddling! Some are thinking about getting out evenings after work, some look forward to day paddles on the weekend and others are planning longer multi-day trips into the back-country.

No matter what your plans are, good paddlers are looking at their boats, their equipment and their skill levels. All need to be reviewed, checked and prepared to get the most out of the paddling days ahead.

To get ready, I went to Ontario Sea Kayak Center's Kayakpalooza last weekend. The event was the perfect way to warm-up and prepare by getting out on the water with some instructors who put us through a series of exercises to practice the safety aspects and the various other skills which together help us get the most out of the coming summer. Not only was the instruction well done, the chance to get together with a large group of like minded kayakers was a great kick-off to the season.

Happy, safe paddling everyone!
Posted by Michael at 11:28 AM No comments: