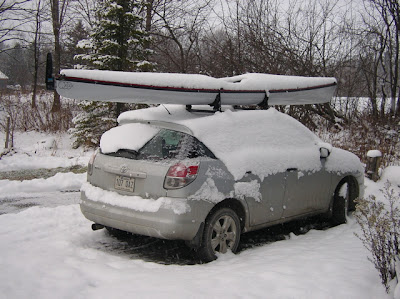 I guess the news is just about out. Someone we all know is HOT to paddle a kayak around Cuba and I have an idea we will not be surprised to learn who it - or they - are. I don't think it has ever been done, so the temptation to be 'first' is burning a hole in a few brains. However, the real question is, should people we know be planning this trip at all? I used to think so, but I'm wavering...

A couple of years ago a friend and I were at an outdoor show doing the usual oohing and aahing that one does at these shows. We stopped at the Cuban Tourist booth. As we discussed our possible plans with the Cubans, it became obvious that there would be problems quite different from paddling in many parts of the world. First there would be permit difficulties of all kinds. We'd need 'tourist visas' which were only good for a few months, but could possibly be renewed for up to six months. We wondered how long the trip would take. Would six months be enough? Would we be forced to stop, leave Cuba and re-apply for new visas to complete the trip? Were there ways around this regulation? There were other problems such as part of the Cuban coastline was presently closed to tourists. We were told we'd have to get special permission to travel on these sections. There was also the American base in Quantanamo Bay. More permits...

The most interesting 'obstacle' was that we'd probably be required to take a Cuban paddler along with us, much like those paddling the Kamchatska coast were required to do. And much like that case, we wondered where we would be able to find a capable Cuban paddler in a country too poor to support a decent lunch, let alone much of a paddling community.

The recent 'scent' I've been getting of a Cuban Challenge brings all this back to mind and I've come to a new decision: I won't join the expedition after all. It seems to me that we 'rich' Gringos are not the people who ought to be the first to paddle around Cuba. That honour ought to be a Cuban's. I'd be more interested in going to Cuba to help some local people train and put a team together so they could make the trip. I'd be prepared to do many things to see young Cubans discover the sport we love and to raise the level of awareness in their country for international sport and the kayaking community. But I won't be going around just to be first. Maybe second or third..., but not first. That cup belongs to a Cuban.

For a glimpse of what this trip might be like, check out this link: Cuba: A dry Run from Outdoor Magasine.

Meanwhile, my kayak needs the snow cleared off it if I'm going anywhere!
Posted by Michael at 5:44 PM