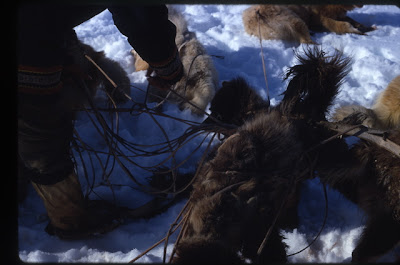 Dave Silbs talks about making amends when things go wrong in our lives. There are often several ways of doing this. Most of them work. All are worth trying at least once as long as you're sincerely interested in making things better rather than worse.

My two photos today show how Inuit solve the age old problem of tangled traces. Eastern Canadian Inuit run their dogs in a 'fan hitch' unlike Alaskan people, who being in areas with trees, find running dogs strung out along a central line more convenient. The problem inherent in a 'fan hitch' is having to untangle the traces every now and then because the dogs are constantly changing places for various reasons.

In the top picture, the problem is solved by stopping the sled - probably brewing up some tea - and untangling the traces. Each line is detached from the short single line attached to the sled, untangled and re-attached. Once the tea is finished, the sled is ready to go again. 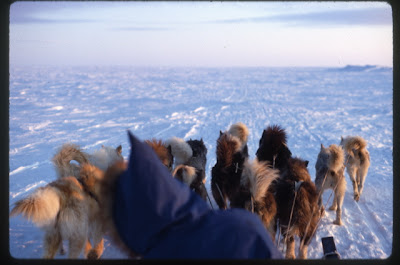 In the lower picture, the traces are untangled on the go. The sled driver pulls in all the traces close to the sled and temporarily ties them off. As the dogs continue running, the driver then untangles the traces and re-attaches them when they've been sorted out. He then lets the traces out to their normal full length at 20 feet or so. Problem solved!

So, if you've got a problem, it's comforting to know that there may be several ways of solving it. Just keep in mind that doing nothing will only make things worse. Keep your dogs happy, and they'll feed you forever! Ignore them, and they may eat you!
Posted by Michael at 1:03 PM

Michael, thanks for sharing your Arctic experiences and slides. Truly fascinating.