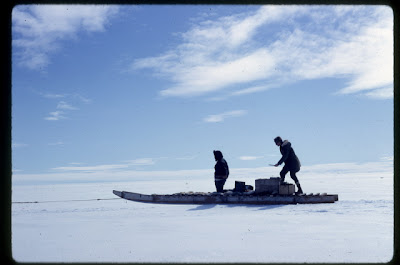 Hopefully the last thing most serious kayakers - or anyone else, for that matter - are thinking about as we paddle into the Holiday Season is take out food! Holiday diners ought - in my opinion - to be either home cooked with a gang of friendly, happy people in a large country kitchen, or eaten out in a hearty restaurant where good cheer prevails.

However, I thought you'd like to know that 'take-out food' has long existed in North America, long before it became 'Fast Food'. This picture is an example of it. At first glance one might get the idea that a murder is about to happen as the guy in the rear stabs the fellow in the front of the dog sled, thus settling a long standing feud between their families. Alas, the plot is much less thick. The guy with the knife is standing over the food box, an essential item carried on any hunting trip. He is preparing tea, on the run. The knife is probably for spreading butter on the bannock, a bread-like food, made from flour, lard, baking powder and water, all cooked up in a frying pan. The Inuit are very fond of tea, boiled up hard with lots of sugar and either some bannock or a rock-hard biscuit or two.

In spite of its name, the box doesn't actually have much in the way of food in it. Usually it contains a stove of some sort, pots and a skillet, some butter, tea and, naturally, lots of sugar. Taking a lot of food with one hunting is to beg for bad luck. Better to take nothing. A hungry stomach is marvelous for sharpening one's hunting drive and steadying one's aim.

Think about getting up from your Holiday Dinner just a wee bit hungry. You'll paddle just a bit more easily on your Boxing Day outing round the bay. And why not stop for some sugary tea and bannock along the way like the Inumariit do!
Posted by Michael at 3:36 PM