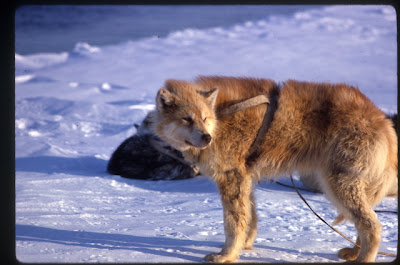 When I first went out seal hunting using dogs and a 'komatik' as the sled is called, it was a thrilling experience. I was finally in the arctic and going on a seal hunt with Inuit people. It was a long held dream of mine, come to life. My first surprise was learning how fast the dogs could trot along. As we would jump off now and then and run along side the sled to warm up, I found the dogs kept a healthy jogging pace, about 7 mph. In the snow with heavy boots on, one quickly warmed up and dropped back on the sled. Before long however, you were back up for another run. It took me a while before I adopted the local fatty seal meat diet which allowed me to stay warmer, longer.

As I didn't know how to speak or understand any Inuktitut at first, conversing was difficult. The guy I was with that first outing spoke no English and in answer to my many questions kept saying what seemed to be "Oh my...". I was worried we were having some kind of trouble and for the longest while I was quite worried. When nothing life threatening seemed to happen, I realised he must be saying something else., but what? Eventually, as my command of the language improved a bit, I discovered he was trying to tell me he didn't understand my questions, so couldn't answer.

The expression he used was 'Aoumi' which itself is an interesting word. It's an expression which has several subtile meanings beyond, 'I don't know.'. It can also be used to mean 'Don't bother me with that now' or 'I know, but I'm not telling you' or 'I can't really say, even though I do know the answer'. It is a word used when you don't wish someone to know something, but don't wish to give offense by not saying exactly what you know. Politeness requires you don't keep prodding for the answer. You aren't supposed to know, so drop the question. Not openly offending someone was very important in Inuit culture when people often lived in close quarters for months and survival required people to get along with each other even when serious hatreds might have existed hidden away. Language can tell you so much about a people, especially if you look at the words being used and see how expression are formed.

They had a lot to teach me, as you can imagine!
Posted by Michael at 9:41 PM

Michael,
I am glad I've found your site. This is interesting material and well written. I look forward to learning from you.

Heaven help you in that case! ;-) Thanks for the kind words, however.