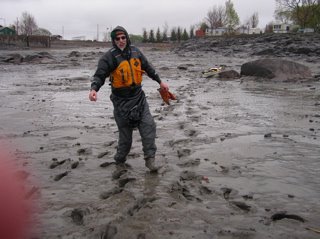 Once we were finally clean again, we took a drive down the river to check out the possibilities for launching elsewhere. This shore is known for its traditional old fashioned architecture. This was where the French first settled in New France in the 1600's and many of the original divisions of the land still exist. A lot of the old houses have been carefully restored especially in Kamouraska, perhaps the crown jewel in a string of wonderfully quaint towns along the river. We stopped to explore and have something to eat.

To our surprise, down at the public beach, two kayakers were attempting to do exactly what we had tried to do only hours earlier! This time we took seats on the wind torn wharf to see how they did. Perhaps they were more skilled than we were...

The girl launched first with the help of her friend. She stabbed into the waves with confidence. So far so good. As she moved out from the lee of the wharf, the wind caught her bow and swung it downwind. She tried to correct, leaning into her turn, but more and more her boat was driven backwards despite her efforts. She slowly headed backwards towards the rocks downwind of the launch site. Then her boat turned broadside to the waves, and over she went. Like me, she had little choice but to wet exit. She and her boy-friend walked her kayak back to the more protected put-in. Her paddle was over.

Undaunted by her experience, the boy-friend launched into the waves. Like her, he paddled out looking very much under control until he passed into the wind near the end of the wharf. He too was blown rapidly downwind, however he was able to stay further offshore, away from the jagged rocks. He struggled to get his bow heading upwind, but obviously the boat would not respond as he wished. Within moments he turned downwind and headed parallel to the shoreline. With only jagged rocks as far along the shore as we could see, it was clear he would be in trouble wherever he decided to come to shore.

We raced back to the car and headed along the coastal road trying to keep him in sight. Hopefully we would be able to help when he came ashore. We weren't the only ones. In the end, several of his friends, including his girl-friend managed to get to him in time and perform the rescue without harm to either him or his boat. He was lucky that day!

As the wind and rain continued into the afternoon, we decided to break camp. We rented a tiny cabin right on the water's edge and watched the waves explode against the stone cliff a few feet away. The chocolate spray splattered against the windows of the cabin just like it does on the sides of a milkshake canister. We wondered how the whales were doing. It was comforting to be warm and dry inside!
Posted by Michael at 11:17 AM