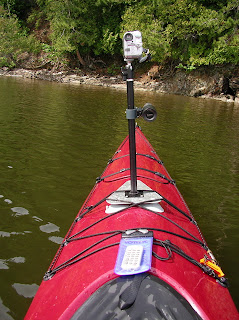 The video I posted earlier in the week was taken with my 'calm weather' camera set-up. In the picture on the left, it's the video-cam sitting on top of the post. Unprotected from the elements, it produced quality images, but would never survive a dunking or a rainy outing. The other advantage is that I can turn it on and off with a remote which I keep in an AquaPac case. Very handy.

Lower down on the post is my mini-cam sold by Oregon Scientific. It, on the other hand, is totally waterproof, easily able to take a roll or two or a wild surf landing. The quality of the image is not as high, but that is the price one presently pays for protection these days.

I filmed the cliff scene with both cameras simultaneously to see the difference. The video-cam was able to capture a better picture as it uses multiple points of the image for detecting light levels and adjusts accordingly. The mini-cam seems to use only a single point light level detection system so that a mix of cliff and sky in the image results in the cliff being very dark and the sky being very bright. This was the difficulty I experienced in Florida during the winter with the Viosport lens. Both the Oregon and Viosport lenses can be improved slightly using a polarizing filter, but only marginally in my experiments with them to date. Each time I go out, I learn new things. I guess I'm still a young video dog!

Both cameras have a 'quick-release' feature which enables me to attach and un-attach them quickly.
Posted by Michael at 12:06 PM