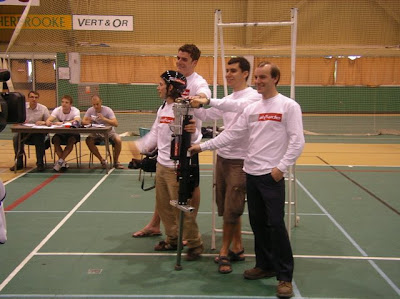 We are absolutely living in 'extreme' times. Yesterday I went to watch my daughter's boy-friend's team of engineering students try out their newly designed pogo stick. Now pogo sticks have been around since forever, but these guys had taken the stick used for the 6 foot Guinness World Record jump and engineered it into an 'extreme' variant. Their new super-charged pogo stick was theoretically capable of doubling the current record and possibly more! In front of judges, press, friends and family, David Barabé pogo jumped himself over an 8 foot high bar, and bounced his way into the record books. I made a video of the jump and am waiting for the boy's permission so I can post it on YouTube. In the meantime, here's a look at the post jump champs posing for the press!

UPDATE! You can now see the record jump on YouTube!
Posted by Michael at 9:30 AM

Which one is the son-in-law to be?!