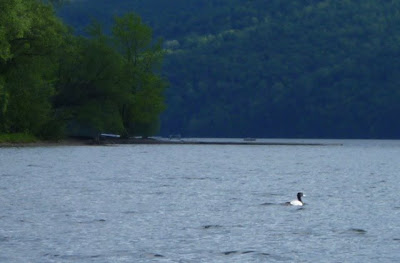 Living and paddling where I do makes for interesting times, especially in the Spring and Fall when many species of birds migrate. You might think that being out on the same water several times a week can get boring, but these birds are one of the things that keep things interesting.

Yesterday as I paddled down the western shore, I noticed an unusual duck. As the various merganser ducks have been common recently, I thought it was one, but when it flew off, I missed seeing the large white wing patches. Instead this bird had a narrow white band along the trailing edges of its wings.

A little later, returning along the eastern shore, I came across the same bird. This time it didn't take off immediately on my approach so I was able to get the quick photo found above. Once I was at home I was able to identify it. It's a Greater Scaup, one of two Scaups found in eastern Canada. It will soon head on further north unlike the three loons I also saw who will spend the summer in the area.
Posted by Michael at 8:22 AM

looks like a lovely day to be out paddling!
its difficult to identify new birds, even with a photo and an available library.. I envy people who 'know' these things without having to look them up