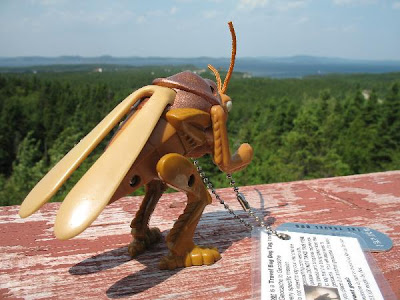 When kayaking in Newfoundland this past July, I took some time out to visit the lookout between St Chads and Burnside. I'd been there before, but some fellow kayakers from Alberta were visiting the area, so a scenic overlook was in order. While there I discovered a Geocache, a small container holding several items and a log book. It had been left there several years ago by a mysterious geocacher named 'YQX52'and originally held the little bug figure in the picture above.

I knew very little about geocaching, but have since become interested. In fact, I'll be taking my first geocaching kayak trip in about ten days and hope to locate a number of cache sites while I'm gone. All but one can be reached by kayak. One is on an island and the last one will require a short hike after paddling to the nearest point on the water.

I'd never considered this idea before, but I'm look forward to seeing how it meshes with my kayaking interests. I suspect it will enhance it!
Posted by Michael at 10:36 PM

Mike,
I am back! I love the idea of geocaching. I have yet to do it. Did you have fun on your trip? Also, did you enjoy NFLD? We went last year and had a ball. But didn't get to kayak.

Dear Author ckayaker.blogspot.com !
In my opinion you commit an error. Write to me in PM.