That's A Lot Of Geese 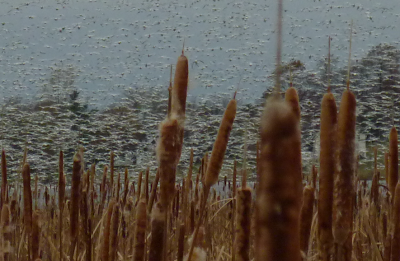 Instead of going for a paddle the other day, I went bird-watching and geocaching on a local pond in Danville, Quebec. This pond, situated virtually in the town itself, has been a lay-over spot for migrating snow geese for several years. At first only a few hundred had been showing up, but more recently they number well over 100,000 birds!

In the photo above, I was standing in reeds and bull-rushes well over my head trying to get some video footage on the swirling birds. This still was among the mix I took. It gives the feeling of drowning in reeds and birds which was exactly how I felt at the time!

We have a few hundred on a pond closer to the house, but the shear number on Burbank Pond in Danville is staggering. A sight to see!

Oh, and lots of fun geocaches in the area as well!
Posted by Michael at 7:35 PM