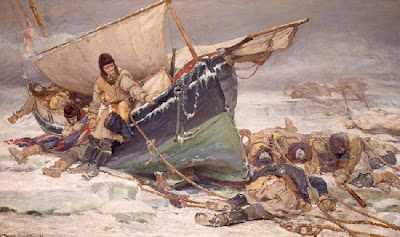 Several years ago I started a second 'C' blog apart from 'C'kayaker, which I called 'Ctories' my contraction for 'Canadian Stories'. The first piece I began writing was called Ilatsiak, after a mysterious shaman encountered by the Canadian Arctic Expedition in 1914. Diamond Jenness, an ethnologist on the expedition, wrote about meeting this man and some of his comments about him prompted me to forge the link between Ilatsiak and the ill-fated Franklin voyage which was lost about 60 years prior.

My attempt to write the story began well, but over the past couple of years it faltered and then stopped entirely. I have begun 2010 with a new determination to see Ilatsiak's story through to completion. If you're at all interested, click over to my Ctories blog and pick up the story. It's now at episode 73...
Posted by Michael at 10:16 AM

Given the racy comments left on the blog recently (!), I've put in place Google's protection system...