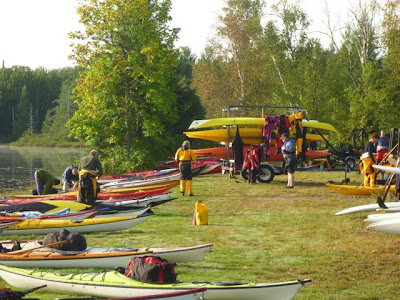 Most folks into Greenland style paddling and rolling know about QajaqUSA's fall retreat called Delmarva and many have made the annual trek to meet up with friends and share their knowledge and skills. Well, now we have the makings of a similar event in Canada. Learn To Kayak, two people from the Toronto area with the help of friends and businesses put on the first annual Ontario Greenland Camp last weekend. Space was reserved for 50 kayakers and mentors at Camp Tamarak in the Muskokas and we got down to business. 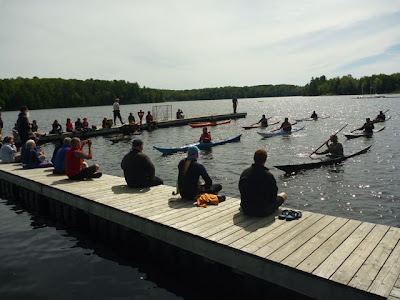 Skill sessions were held in a number of areas including rolling, of course, forward strokes and harpoon throwing. In the photo above, a rolling demo was put on for us to enjoy. I missed the games event which was re-scheduled, but it included a race taken right out of Knud Rasmussen's movie, 'The Wedding of Palo'. I understand it was lots of fun although the weather conditions were somewhat better than that seen in the film!

All in all, a fun event! I hope to return next year... If you're a FaceBook member, lots of photos from the event can be had on the Learn to Kayak page.
Posted by Michael at 2:24 PM

Looks to have been a great event.

Checked out the FB photo's, looks like a great event. Is this the first ?

Lot's of fun for sure and plans are to get it rolling next year!