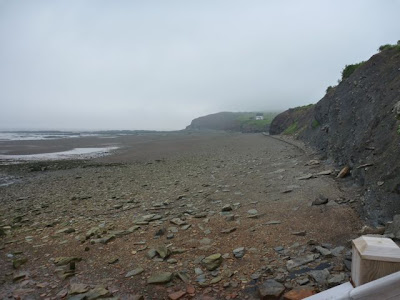 As we paddle along the seashore, we often watch the scenery and look for interesting items which make the paddling experience more rewarding. The possibilities are nearly endless, but recently I had occasion to be in a particularly interesting spot: The Joggins Fossil Cliffs on the Bay of Fundy in Nova Scotia. This place is listed as a world heritage site by UNESCO because of the fossils found in the area. I took the beach walking tour, but when the water is higher, it's possible to paddle along the cliffs and see more or less the same things I saw. In the photo above you can discern the recent high water mark right at the base of the cliff, but being the Bay of Fundy, one needs to be very vigilant of the tides as they are among the highest in the world. As well the cliffs are very active with frequent rock falls exposing new fossils all the time. 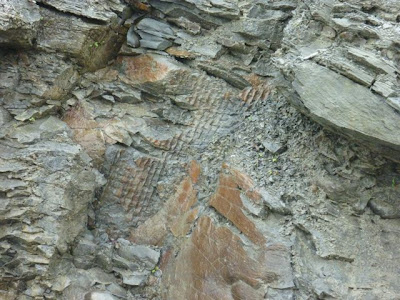 There are two ways to see the 300 million year old fossil trees embedded in the cliffs. The first can be seen above as an impression of the bark of the tree remaining in the surrounding rocks where the tree once was. Often the results are astonishing clear and vivid, as seen in the above photo. 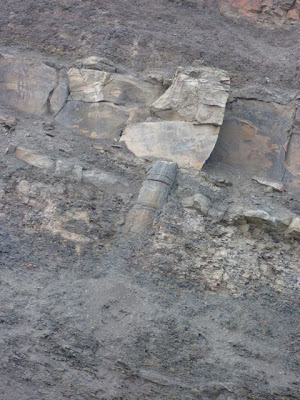 The second is the fossilized remains of the tree itself as seen above. These particular specimens once grew up to the height of ten story buildings. Today, their nearest relatives are club mosses, only a few centimeters high at most. Fossils collected at this site were used in the famous Darwin evolution trials in England, which partly accounts for the site's status with UNESCO. At the time these fossil trees and animals were being buried, so where the swamp beds which created the oil and coal we find today. The Joggins area is laced with coal seams. In the above photo, a tiny one can be seen heading out into the Bay. Other larger ones can be seen in the cliffs, and the beaches are streaked with coal dust eroded from the cliffs.

So next time you watch the shore as you paddle by, wonder about how old it is and what its history might be. Oftentimes you'll be amazed!
Posted by Michael at 8:35 PM

I also find this so interesting. A little research on the areas paddled in adds so much to the overall experience. Often the emphasis is on seeing wildlife while missing the geology.

I was there two years ago and i was impressed. Unfortunately i had no time to visit it very well because i was there for only two days, but i hope to visit it again very soon. I recommend this place, it is very nice.

greetings from the Amish settlement of Lebanon,pa. Richard from Amish Stories

great stuff.. love the photos too.