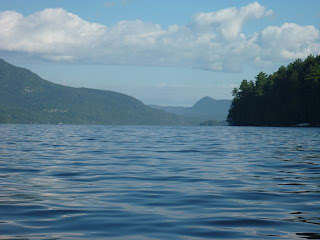 Lake Memphremagog is an international lake straddling the Canada/USA border between Quebec and Vermont. A small part of the lake just north of the border is part of the Northern Forest Canoe Trail. This interesting water path makes its way from the central Adirondacks in New York state all the way to the New Brunswick border in northern Maine following a series of lakes and rivers. Visit their site to see the exact route and other details.

In the photo above, one can almost see where the trail enters Lake Memphremagog on the western shore near the center of the shot. From there one paddles southward to the border. 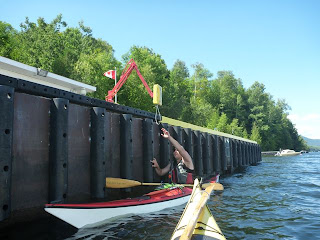 This photo was taken at the Canadian border check-in wharf. Paddlers working their way south need not stop at this point and will clear American customs at the town of Newport at the head of the lake. However those entering Canada must stop and call in their information.

We thought we would try the system, but found it not very well suited to paddlers! The phone at the end of the red suspension system was out of reach. Only by waiting for a wave high enough to pass under our hulls were we able to grab the handset cord and pull. Not the best of methods and sure to eventually wreck the phone. Once we made the call, all we heard was static and various ringing sounds, but no one answered...

We paddled on and enjoyed exploring the trail. Highly recommended!
Posted by Michael at 11:19 AM