Between Birds And A Hard Place 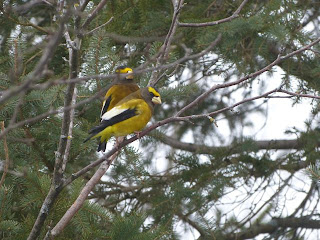 The ckayaker staff is back at work after a healthy holiday break. While there isn't a lot to report on the kayaking front given the almost total lack of open water at this time of year, there are some things of interest nonetheless. Here's an example...

In the photo above you'll notice a couple of Evening Grosbeaks. Not so many years ago, these birds were a common winter sight along roadsides and at household feeders around where I live. They would appear in flocks of twenty or more, males and females together and provide a dash of colour on the winter snow. Then a few years ago, they all but disappeared. Some years none were seen. Other years you might see two or three flit by and disappear almost as quickly as they had come.

This winter they're back. Not in the numbers of years gone by, but today, for example, there were perhaps a dozen or so in the trees around the feeder. They came and went all morning as they have done several times in late December and early January. Does it mean they've given up their wandering and returned for good?

Sadly, no. We've just got lucky. Over all their numbers are far fewer today than in the past. I've heard a variety of suggestions about why this is so, but I don't think the definitive answer is in. Whatever the reason, it doesn't paint a healthy picture. The environment is changing and squeezing these lovely birds into a hard place where their existence is threatened. I wish it wasn't so.
Posted by Michael at 10:13 PM