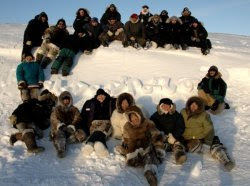 Do you like watching films made by Inuit about their lives past and present? If you are a fan, I've some good news. Isuma Productions of Igloolik have announced that a northern Québec film company based in Puvirnitug named the Arnait Video Collective has released a new feature length film for us called Before Tomorrow.

Here is a short quote from their press release...

Before Tomorrow is the story of a woman who demonstrates
that human dignity is at the core of life from beginning to end, as
she and her grandson face the ultimate challenge of survival. The
film is an adaptation of the novel, 'For morgendagen', by the
acclaimed Danish writer, Jørn Riel.

The film, by Marie-Helene Cousineau and Madeline Ivalu will be celebrated at the Toronto International Film Festival (Sept 4-13). The film will be screened on Sunday, September 7 at 2:30 pm at the Scotia Bank Theatre 4.
Posted by Michael at 9:13 PM