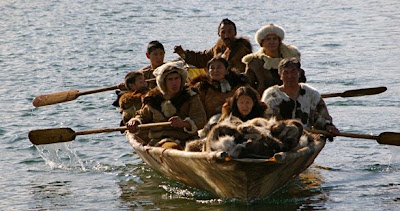 Image taken from CBC's Inuit Odyssey web page.
David Suzuki's television program The Nature of Things will present Niobe Thompson's documentary film Inuit Odyssey this coming Thursday night. If you happen to be located in a region where you can pick up this program, I suspect you will be delighted. It tells the story of the Thule Culture people, those we know today as the Inuit, and their journey through time across the arctic landscape from west to east. Their story is a sweep across the top of North America from eastern Russia to the southern tip of Greenland, into Labrador and into the barren grounds of Canada. It promises to be an interesting glimpse into the history of the people who brought us the kayak.

If you cannot get The Nature of Things here are some web sites connected with the program...
- Inuit Odyssey
- Promo clip
- Buy the video!
Posted by Michael at 11:21 AM

Thanks Michael. You're readers may also be interested in the five part series currently showing on PBS' the American Experience: We Shall Remain - "a multi-media project that establishes Native history as an essential part of American history."