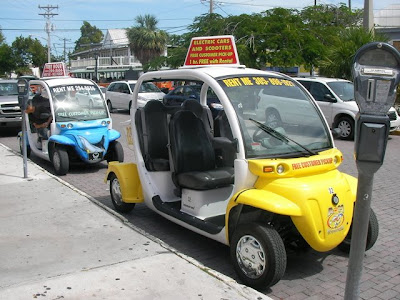 One of my themes this year when blogging is to keep an eye out for alternatives to our oil dependent livestyle. While in Key West recently, I was impressed with the number of simple electric vehicles being used. Most were in the 'For Rent' category, but not all. Private citizens are making the switch to them as well. Certainly a place like Key West is idea for such vehicles. It is warm, flat and totally contained on a small island only a few miles in length. A full battery charge would easily last several days of use. Another plus is most of the technology is well known from the golf cart industry, easy to maintain and relatively recyclable. Adapting a kayak roof rack to fit would also be a simple matter... 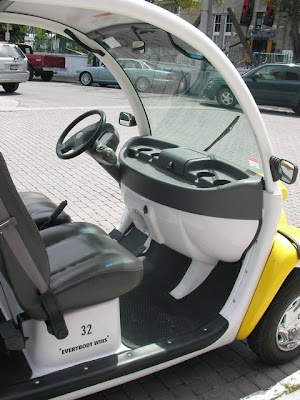 Perhaps the downside was the almost total lack of visible solar electric panels either on the cars or anywhere else for recharging the batteries. Given that most electricity in Florida is produced via carbon based means, the actual benefits of driving these cars is not as great as it would appear at first glance. Still, people using them do get the idea that a 'real' car is not necessarily the drudgery they might have thought it was going to be and, by itself, that's a move forward.
Posted by Michael at 10:39 AM

Good thoughts. I wonder how they do in a crash (with a drunk driver in a bigger car).