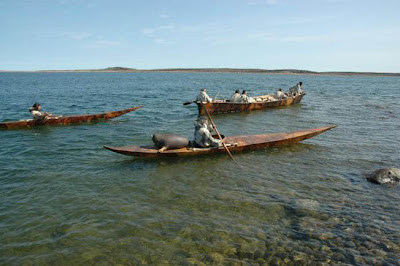 If you saw Isuma's film Atanarjuat several years ago you may remember there is a kayak scene in it. It was interesting to see that kayak as it's design was quite different from the more commonly seen kayaks of Greenland on which modern glass and plastic kayak designs are often based.

In the more recent film Before Tomorrow, a Greenlandic story is told, produced by Inuit from Igloolik and filmed in Nunavik, in the Puvurnituq area. Of interests to kayakers is the presence of several traditionally built boats as well as a larger umiaq. The kayaks seem to be a mix of traditions, flat bottomed and long as seen in northern Quebec, yet using a bent rib construction method more common in Igloolik and Greenland. It would be interesting to learn more about these craft and who made them. They remind me of a kayak I saw years ago in Igloolik and certainly the dialect of the actors was north Baffin Inuktitut. Interesting...!
Posted by Michael at 3:05 PM

All your posts are interesting.

Michael, the qajaq in Atanarjuat was a fiberglass replica of one from the area that was a museum in Britain. I could be wrong but I think it was from one of the Ross expeditions.

You know doubt know the man who made it, he's a long time resident of Igloolik. A qallunat, who originally came there with the HBC as a young man.

Clare - Yes, the kayak was made by John MacDonald of Igloolik who I do know. He based it on a kayak collected by Parry, who wintered in Igloolik in 1820. John and an Inuk lady, Leah Otak, when to the British Museum in LOndon and opened cases of caribou clothing collected at the same time. They were amazed at the fine workmanship they discovered!