The Last Qajaq in Igloolik 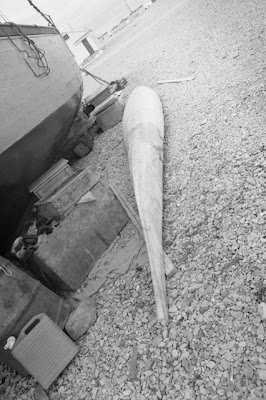 I knew I had seen a skin kayak on the beach in Igloolik during the summer of 1968, but for the life of me, I couldn't locate a picture of it. Over the years, I came to the conclusion that I didn't have a picture of the boat or if I did, then it had been lost in the intervening years. After all, that was nearly 40 years ago and I've moved a few times since then, clearing out stuff as I went.

About a month ago, I began systematically making digital copies of all my arctic photographs. I had taken hundreds of them beginning in 1967 in the western Canadian arctic around Bathurst Inlet and continuing to the whole area of northern Foxe Basin and arctic Quebec. I knew there might be a few surprises along the way, and sure enough, just before New Year's, I hit pay dirt: four pictures of a kayak on the beach in Igloolik taken in 1968! These are the pictures posted here. Click on them to get a slightly larger image with more details. 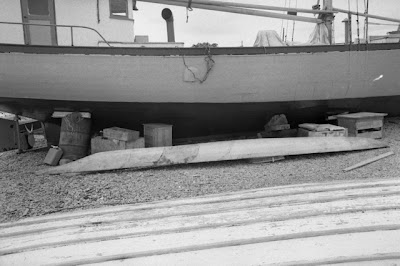 The boat itself seems to be in good condition, particularly the skin. My recollection was that the skin had badly deteriorated when I'd seen it. I recall people telling me that it leaked badly and was dangerous to use. Was this a second boat, or is my memory not accurate? This boat is seen lying between a canoe and a Peterhead boat, again not exactly what I remember, but very telling in a way. Seen between the two other boats one can tell precisely why Inuit gave up qajaq hunting. The freighter canoe with outboard motor became available, was affordable and could carry much more in the way of hunting equipment. The large Peterhead boat on the right became the boat of choice as people grouped together in coops to hunt and run various other enterprises. Suddenly the kayak was not the competitive choice and it soon disappeared. 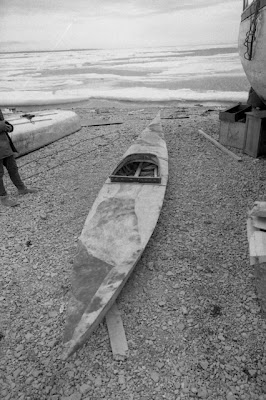 The construction of the boat is also interesting. Note the use of plywood both for the coaming, a few nails here and there and a few plywood ribs as well as the use of some spacers to fair the hull. I can also see numerous stringers (are there 6 plus a keel?) running fore and aft, not the three more commonly used in Greenland boats, nor the often seen three piece rib and flat bottom construction used in most eastern Canadian kayaks from south Baffin, Quebec and Labrador. The very round bottom suggests to me that it was a tippy boat which is probably why people claimed it was dangerous! 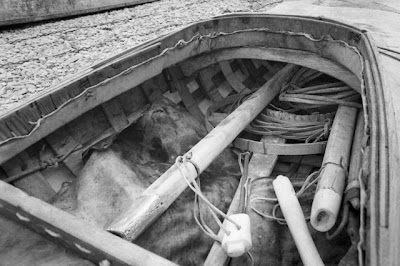 I was glad to see the wealth of hunting equipment stored inside, another feature I hadn't recalled. I find the multi-piece harpoon particularly interesting, especially it's walrus tusk break-away head. There is also a seal hook, lots of seal-skin line and another item I don't recognize (the circular item attached to the wooden T or cross shaped board). Perhaps one of you readers would know its use...

So, an interesting boat which seems to incorporate interesting design ideas from both northern Baffin Island kayaks as well as the Netsilingmiut boats further west of Igloolik. A delightful Christmas present to myself after all these years of searching!

Tomorrow, I'll post some pictures giving an idea of the context in which this qajaq was last used: the Inuit hunting camp at the flow edge off Iglulik, a place where people have lived and hunted for well over a 1000 years.
Posted by Michael at 9:41 AM

Fascinating stuff, Michael. Thanks. I wonder if Harvey Golden will see these and comment.

He might. I put up a link on QajaqUSA so lots of people have been having a look. I plan to drop him a note as well when I save up enough money to get his new book!

Harvey's book? Don't wait. Scrimp on something else!