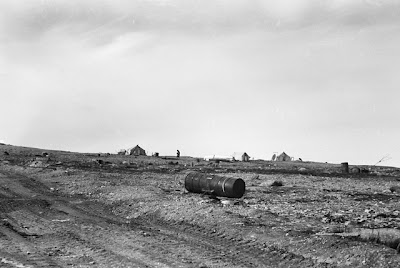 When people first began moving to Igloolik, the new government built town, there was very little in the way of housing. People moved anyway. They missed their children, who were attending school and wanted to be with them. So, at first, many people lived in tents on the outskirts of the new community. 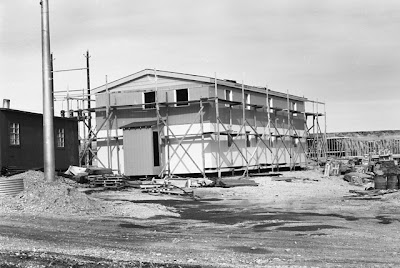 The children lived in the new hostels being built... 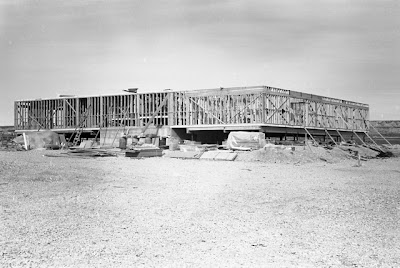 ... and went to school. This building is not the original school, but a newer, bigger school built to accommodate the rapidly rising number of children in Igloolik. 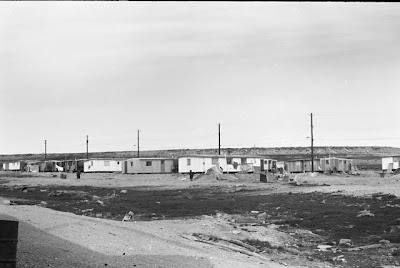 Each summer more and more prefabricated houses would arrive by ship and be built. These ones are a second generation model which began to replace the original one room houses. A town was born.

In the spring, many people would pull their children out of school and head back out to their old camps, to places like the one at Iglulik that I posted pictures of yesterday (I know, it has the same place name as the town. Actually, Inuit call the town 'Ikpiarrjuk', meaning 'pocket' after the bay its located on, so the confusion is only an English thing). As for kayaks, their existence faded rapidly from memory. Everyone, especially the young, began to think of them as 'old-fashioned', something from the old days, as they eagerly embraced a new lifestyle in a 'modern' world. It would be the next generation that began to realise what had happened and it became their task to try and salvage what was left and record it before it was gone completely. Igloolik has been a leader in this race against time and thanks to people now living there, a detailed record exists. However, few artifacts, and no qajaq remain.
Posted by Michael at 9:36 AM

I am too. So this is the face of "progress".

I am surprised to hear that Inuit called Iglulik "Ikpiarjuk" as that is the Inuktitut name for Arctic Bay. I've never heard anyone here speak of it as anything other than Iglulik. I'll have to ask my sukik

The things you learn. Iglulik is also known as Ikpiarjuk, same as Arctic Bay.