Warm Enough For You? 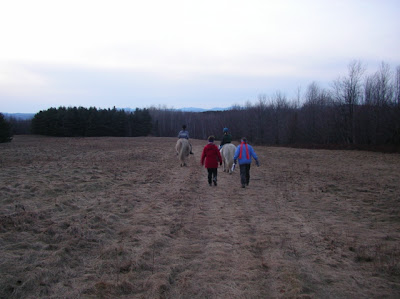 Since I discovered MSN Messenger last Fall, I've enjoyed 'chatting' with friends here and there. This evening I was speaking with Mary Nassak from Kangirsuk, a community on the west coast of Ungava Bay in northern Québec. Among other things we talked about was the polar bear which wandered around her town a couple of days ago and the fact that the river passing the town had yet to freeze over, something which normally occurs in October!

At first I didn't see the common thread in these two events, but of course, it is obvious. The bear was hungry. It came to town to look for food. Why was the bear so hungry it decided to try visiting the town, normally a place to avoid? There was not enough sea ice to allow it to follow its normal hunting pattern which at this time of year would take it far out into the middle of Ungava Bay.

Mary didn't mention what became of the bear, whether it was chased away or killed. However, the strangely warm weather seems to be affecting much of the northern part of North America and perhaps other places as well. It is worrisome, especially as, around here, this is the second winter with little or no snow. The picture above was taken this afternoon during a walk with our horses and some friends. Normally in January, we would be skiing this field, not walking it!

There are some climate change models which predict, sudden and rapid fluctuations from a cooler to a warmer climate regime. Let's hope that's not what we're experiencing! The economic impact is already being felt, but if the weather pattern persists, the impact will certainly be enormous and expensive. My dream house on Baffin may be something I should look at sooner rather than later...
Posted by Michael at 8:06 PM

The weather has certainly allowed for some really nice paddling - but it's definitely unsettling. I did a few rolls without even my lighter hood yesterday - definite ice-cream headache but by this time of year I should be wearing my thicker immersion hood.

Frequent paddling companion Stevie, who's very good at keeping tabs on Jamaica Bay current events, said on Saturday (when it felt like Spring) he's heard that the folks who are working on the J-bay marsh reclamation project are worried about the grasses they've planted being fooled into growth by this weather - if that happens, a good cold snap would really mess things up.