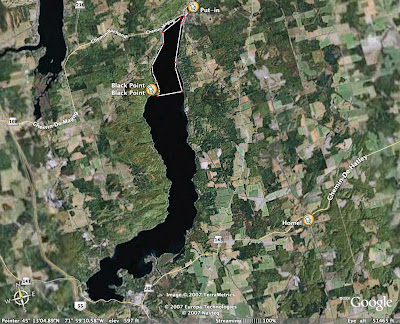 Many of us are using the Google Earth program in various ways to enhance our paddling experience. The program can be used in a host of ways, both before a trip for planning purposes and after a trip to record where you went and what you saw or did. I suppose the really hi-tech among us can use the program en-route as well, downloading pictures of where they are. My interest here was to plot roughly where I went the other day for the fun of it. The exercise also gave me a chance to explore the possibilities the program might have for planning and recording future trips in other areas. 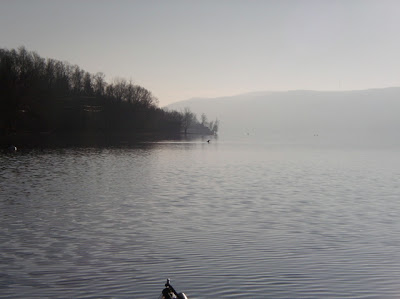 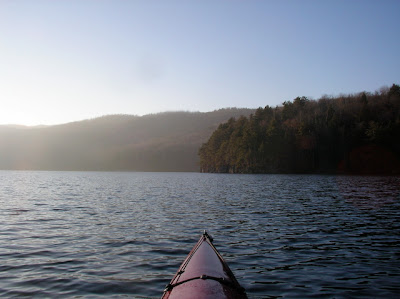 This picture shows you approaching Black Point, having made the crossing over to the western shore. 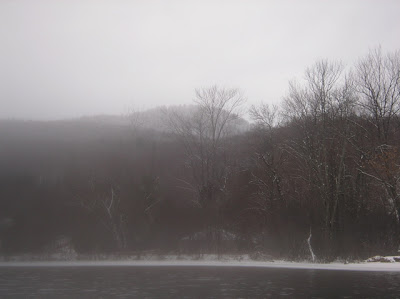 From Black Point, where I had a little look at the ice forming on the cliffs there, I then headed northward along the west shore. About half way along, I passed a small creek entering the lake and that view is seen in the picture above. You can see the mouth of the creek has frozen over due to the shallows at the mouth. Geese had been resting there in the Fall, but they've moved to the south end of the lake now the ice has formed.

The path continues back to the lake's outlet stream, under the two bridges and back to the put-in. According to Google Earth, my path was about 5.5 miles. I can usually do this paddle in just over an hour, but as I stop frequently to look at birds, take pictures and play in the waves, I can take several hours to do this same paddle.
Posted by Michael at 11:24 AM

col idea, I do know somebody who records where you are with his gps. then when he goes home he puts it through a pc programme that puts up a map, tells you how long each stretch took, what speed you were travelling at etc. then he spends the next trip telling you all about it.

I paddled in Florida last winter with people who did that as well. I'm not sure I am into it that much, but for the moment, it is fun playing with Google Earth - and it's free!