Rev Peck took his place in the history book of the eastern Canadian Arctic long ago, but recently the University of Toronto press has released a book of his journals and ethnographic notes. It sounds like an interesting read! I am anxious to see whether there are any references to kayaking in the late 1800's. I'm sure there will be as this was a time of great activity among Inuit paddlers who began hunting for trading purposes rather than just to feed their familes. 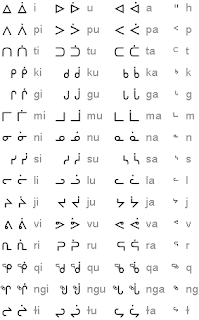 If you are not aware of this interesting man, Rev Peck adapted a syllabic script for the Inuktitut language (see left) which was based on a similar effort made by James Evans, a missionary with the Ojibwe people living in the James Bay area. The writing system was also used to write the Cree language where it is still used today. Peck worked to translate the New Testament of the Bible in Inuktitut using this new syllabic system. By the time of his death, his Inuktitut Bible had traveled far and wide among the Inuit of eastern Canada, even reaching places ahead of the missionaries, who were amazed to discover the New Testament stories already well known. If anyone wishes to learn Inuktitut today, learning the syllabic writing system is essential, but also fairly easy. The version on the left has been developed beyond Peck's original, but still retains the roots of his work. Try writing your name using them!

A short biography of his life and work can be found here if you wish some further detail.
Posted by Michael at 11:08 AM

wow, what an amazing life he had.

Michael, I have been following your blog for a little while now and think you need to update your "about me" paragraph in the right upper corner. I suggest you include the word "scholar".