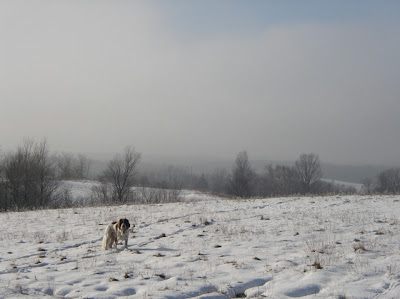 I enjoyed the Holidays and I hope you people did as well. One thing I was able to do was both ski and kayak in December. Both are favourite pastimes with me, but I have never been able to do both at the same time until this year. Normally it's been too cold to paddle in December. The lakes have large ice shelves around the shorelines making launching and especially returning very problematic. Not so this year.

In the top picture, Moss and my wife and I went out for a cross-country ski in the morning of Decemeber 31. There's not a lot of snow for this activity, but enough to go more or less wherever we wished. It was a glorious morning in sunshine and temperatures just below freezing. 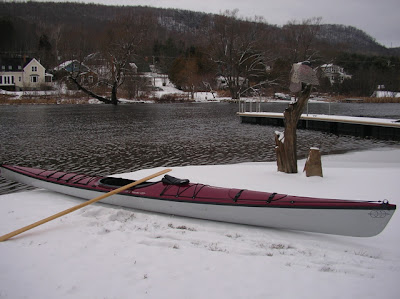 It began to cloud over at noon and with the temperature at about -1°C, I headed to my new put-in on the river leading out of Lake Massawippi. It was perfect. No ice shelf, an easy launch and retrieval spot.

I headed up the river, under the two bridges and out onto the lake. The wind had picked up a bit as the hills funnel the wind at the end of the lake, but as I made my way out into the center, about a mile or two from town, the lake calmed down. It was wonderful to be doing the two things I like to do best and both on the same day in my part of the world. 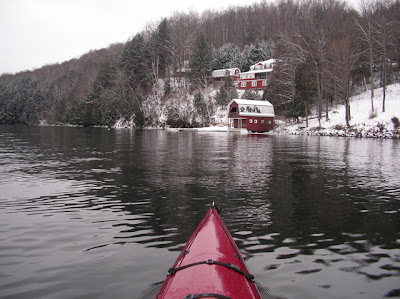 One thing I wondered about as I paddled. The water at this time of year is probably as dense as it ever gets. Could I feel that increased density? At times I really felt the boat was sluggish or it seemed that way. I noticed that spray turned to ice on the deck so perhaps it was forming on the hull as well. I couldn't tell as I paddled, but when I lifted the boat out of the water, there was a slippery layer of ice on the hull making the boat tricky to lift onto the cradles of the roof rack... You can tell I'm new to winter paddling. There's much to learn!

Tomorrow, I'll post about a 'qajaq' I discovered during the holidays. It's a really interesting find!
Posted by Michael at 9:52 PM

Good to see y ou back on line. I look forward to the story you've listed for tomorrow.

what a terrific way to end the year!