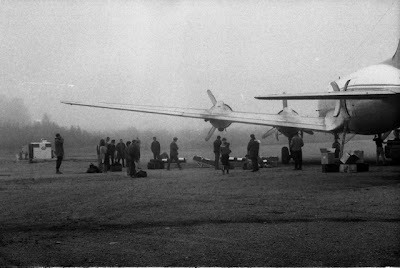 Flying is not supposed to be that dangerous an activity, at least from a statistical standpoint. That said, I have had my share of close calls in the little flying I have done. Here are a few memorable incidents...

The picture above shows a four engine aircraft which has run past the end of the runway in Roberval, Quebec. We were returning south from Iqaluit, Baffin Island at night in 1968 when the plane developed a oil leak in one engine. We were advised by the pilot that he was shutting down the engine, but we didn't need to worry, the plane could easily fly on three engines. Shortly after that announcement, we went to two engines and finally we were down to one and making a forced landing. The pilot managed to get us safely on the ground, but, as you can see from the photo, he used every inch of runway and then some before the plane stopped. We got a ride into town at dawn and 'enjoyed' breakfast at a local hotel before a second, smaller plane arrived to take us to Montreal.

Another 'experience' was flying in a small single engined 'Norseman' up the Ungava Bay coast. I was in the co-pilot's seat enjoying the trip when the pilot passed me a note he had scribbled out. It asked if I thought the 'engine was running rough'? I'm not a pilot and had no idea. Next thing I knew, we were heading down and we landed in a tiny lake in the middle of nowhere. The pilot tried radioing back to Kuujjuak for advice, but couldn't raise anyone. He wandered about for several hours and finally realised if we were to survive this experience, we'd better rescue ourselves. We took off - just barely as the lake was really too small - and returned to Kuujjuak without incident. The engine was taken apart, found to be in perfect order. The pilot was given his walking papers.

I once chartered a pair of small helicopters to fly up the coast of Ungava Bay. I wanted to be in the lead machine, but ended up in the second one. From there, I began to enjoy flying 'in formation' as it were, watching the chopper in front leading the way, then, suddenly, it dropped down below us. Our pilot turned to see what was happening. The other helicopter was in obvious difficulty as we watched it plummet earthward. Just before crashing, the pilot exercised a technique whereby the rotors are allowed to spin freely and then just a few hundred feet or less above the ground, he uses the spin momentum to brake the aircraft, settling it 'gently' on the ground. It was a hard landing, but fortunately no one was injured. It turned out the engine had mysteriously quit and that had forced the emergency landing. It was a doomed machine, eventually crashing for good later that summer. The pilot walked out, but the helicopter remains still sit on a lonely beach in northern Quebec.
Posted by Michael at 9:25 AM