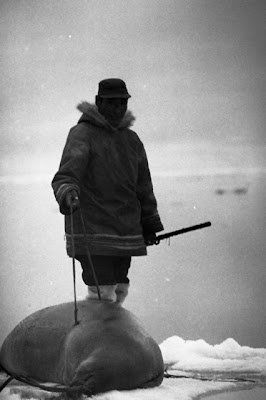 If you're a 'skin-on-frame' qajaq builder, you no doubt wish you had genuine sealskin decklines with bone or antler toggles to tension them with. Well, let's have a look at how the sealskin line is acquired as I happen to have a few pictures that illustrate the procedure.

The top photo shows Enuki Kunnuk beside a bearded seal he has just 'harvested'. You can see he has had to harpoon the seal as they frequently sink after bring shot. Once the animal has been pulled up on a level surface, in this case a pan of ice, he begins cutting series of circular cuts. Each cut makes a 'belt' about 10 to 15 cms wide which will become a length of line. Next he cuts through the fatty layer beneath the skin to loosen it and once that's done, the 'belt' is slipped off the seal. 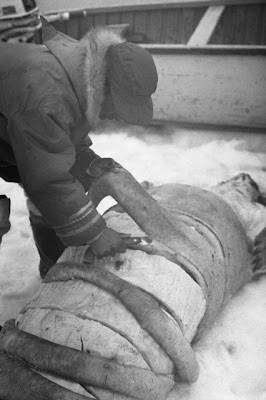 If you have the time, the next step is to let the skin rot sufficiently so the hair can be easily scrapped off. This step can be skipped and done at a later stage. Any fat remaining on the skin must also be removed as well. This is done by using a special scraper pushing the skin against a flat surface. Again, if the skin is a bit rancid, the job goes quicker, although the odor can be... well, interesting! 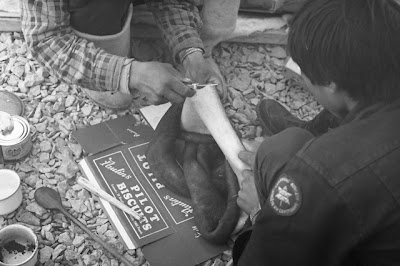 To cut the rope, you will need the assistance of someone to hold the belt and the cut edge tight as you cut. The idea is to take a slice about a centimeter thick along one side and continue this cut round and round until the whole belt has been sliced. As the skin is very greasy and slippery, the assistant will need a stick to wrap the line around thereby holding the cut end tightly. After you make a cut, he then slides the stick grip forward, maintaining the tension. A sharp knife is a must!

This is where my pictures end, but once the cutting is done, the long piece of skin takes on a 'rope' appearance and is coiled up and left to dry in the wind for a few days. It is then taken down and stretched tightly along the ground or on stones a few centimeters off the dirt. Going along the line with a sharp knife, you remove any leftover fur, fat or other irregularities left in the line, leaving it smooth and pliable. Finish by coiling it up and storing it until needed for your decklines, harpoon lines, sled traces and lashings, whatever you'd use regular rope for. It is incredibly strong and, best of all, it doesn't freeze when wet, making it better than rope for many uses in the cold.
Posted by Michael at 10:51 AM

Now I hope the NYC-area G-crew don't go getting any ideas from this post about those seals that have adopted the islands (Swinburne & Hoffman) just south of the VNB as a winter haul-out. Bad enough people go down there & scare 'em off their low-tide sunbathing rocks (although I haven't heard as much in the way of "Let's go see the seals!" this year - somebody posted a really good piece about how the seals really need that sun time last year.

My old decklines are starting to fray, so it's time for a redo - but I think the Romany will be perfectly happy with some of that snazzy new reflective deckline.

Another excellent article. This is such a good series.