What's that... surely not ice? 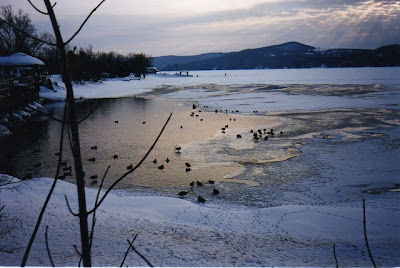 The last time I checked, a few weeks ago, the surface temperature of Lake Massawippi was an amazing 10°C. I was expecting it to be much lower, say in the 1°-2°C range. No doubt this anomaly has been the result of the extraordinary warm weather we experienced during December and early January.

Driving home the day before yesterday, I noticed that ice had begun forming and nearly covered the large shallow bay at the south end of the lake. A bit further north, there was a band of ice reaching from shore to shore something I found somewhat unusual as well, although a stream which enters at that point has created a large shallows which extends well out into the lake, so that might account for the ice. Around the shores the nasty ice shelf has been growing out from the shore. This is the ice that lets you do a seal launch with great aplomb, but then prevents you from returning to shore until spring! It's too thin to walk on and too thick to paddle through. A real dilemma. A friend of mine made himself some little ice picks with which he can propel himself across the thin ice and onto the solid ice while sitting in his boat. Neat, but will they always work...

In past years, the date the lake has frozen over completely varied from Jan 10 in 2004 to Feb 11 in 2006 with the norm usually around Jan 17th. This will be another late freeze up again this year, but I was very surprised this morning, heading down to the put-in to discover the lake is now ice covered at both ends, barring me from paddling! Only the center section now remains ice-free. If we get some wind, the thin ice may break up and allow me access to open water again. However, if we don't get it in the next couple of days, then that's it, I'm off the water until April. Good thing I'm in the midst of making plans for a trip to California. Looks like I can go with a free paddling conscience!

The photo above was taken a couple of years ago, but it might as well be today for all the paddling I got to do.
Posted by Michael at 3:51 PM

Call it an acute onset of reality, Michael. This morning the chill factor is -1 degrees here, and that is F not C. To the pool this afternoon...and thanks for your support this past week.

We had an indoor pool for several years at the local university that was open to kayakers, but it suddenly threw us out, no one was ever sure why. They even got rid of a bunch of river kayaks they kept for non-boat owners. Since then we've had no indoor winter practice locale. So count youslves lucky to have enlightened pool owners in your area!