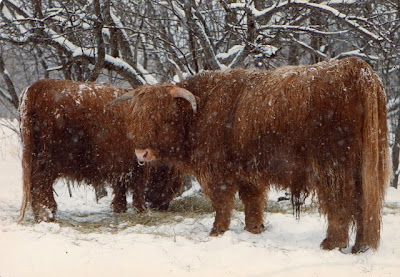 Douglas Wilcox kindly posted some pictures of Highland Cattle on his kayaking blog a few days back as I had expressed an interest in seeing the wonderful animals in their home setting. Thank you Douglas! My father-in-law was a well known Canadian breeder of Highland cattle some years ago now. He fell in love with the animals after reading an article in a magasine and soon after imported a bull from Scotland and purchased some cows from one of the few other breeders in Canada. Thereafter he became known to us as the 'Laird of Swain's Fold'. 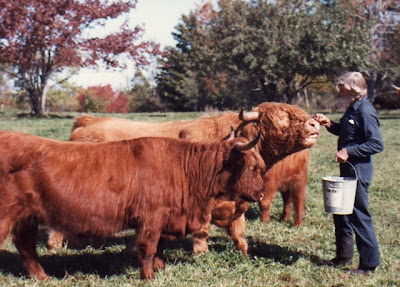 A summer picture for those fed up with winter!
Over the years they filled his life - and ours as well to some extent - and their affairs send him east to Scotland, west to Vancouver and south into the United States on several ventures, all related to these cattle in one way or another. It was his passion, much like many of us have a passion for paddling. The urge to travel far and wide and meet fellow paddlers is deep and rewarding to each of us. When we're not paddling, we're dreaming about where, when and how to go on yet another adventure, near or far, it doesn't really matter as long as there's a paddle in our hands and water gurgling under the hull.

The fold of cattle is gone now, scattered as far away as Tasmania and Sweden, but the memories live on. So thanks again, Douglas. Much appreciated!
Posted by Michael at 11:10 AM

nice creatures, I'm glad they are kept mostly for looking at and not for eating.