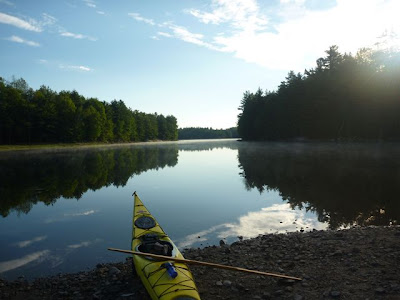 Almost a year ago Mairi Watson and I left a geocache at site #42 on Crotch Lake in Ontario. It was placed in a couple of ziplock bags and hidden under the ground juniper cover. We knew it wasn't the best arrangement, but it had been a spontaneous thing so we went with what we had. In the spring of 2010, we visited the cache and finally registered it on the official Geocaching site. Within a couple of weeks it was discovered. Naturally comments began coming in about the container... Finding myself in the area once again last week, I launched early in the morning to see what I could do to put things right. 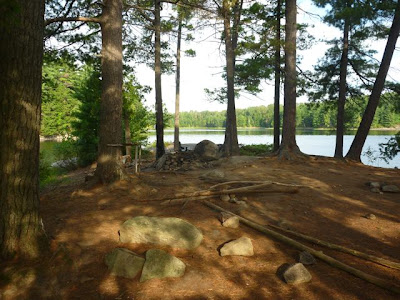 Site #42 was all in order, much as we had left it, although someone had added a green plastic chair, and some firewood, all carefully stacked. The rain and high winds of the previous weekend had required people to add a multitude of rocks to hold down their tents as well as some overhead scaffolding for tarps. I headed off to look for the geocache. I was shocked to find it lying in full view! The juniper bushes were much thinner this year than last exposing the ziplock cache for all to see. In fact, it looked more like trash than a geocache... 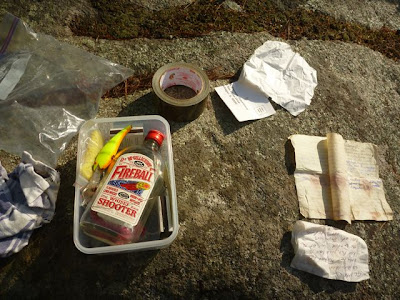 So here is a photo of the new container with its original 'hot' contents together with some of the additional items which discoverers have added over the summer. The new container has been covered in 'camo' duct tape and hidden in the original spot, buried in the ground cover making it less visible, less 'trashy'. Who will be the first to find it now?
Posted by Michael at 10:04 AM

How many people had signed the log since it was first discovered?

It's been discovered around 4-5 times I think. Click on the Geocache link to find the exact number.