Guess who's coming to diner? 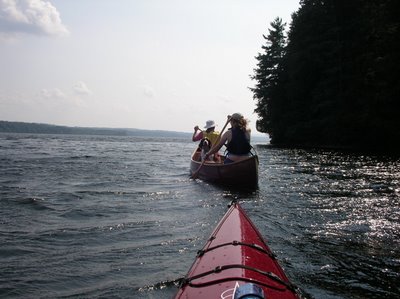 I went out for a combination canoe and kayak paddle today with my wife and daughter and our dog. We had a great time, especially given my daughter was home from Alberta where she had spent the summer working. It was a good day, with just a bit of wind and lots of late summer sun. 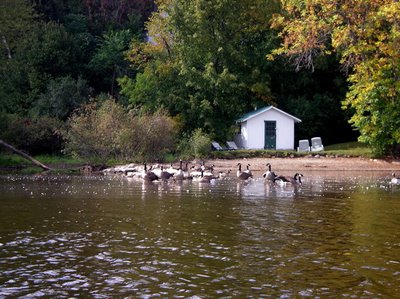 Coming around the old turn of the 20th century pier remains (a old hotel had been on the spot years ago but burned down around the time of the First World War), where a small brook empties into the lake, guess who we saw? Right, a large flock of Canada geese. They seem to be still molting as there were feathers floating everywhere you looked. In the old days these geese seemed to rest up for a day or two and then would head off for their usual wintering grounds along the mid-Atlantic coast of the US. That's changed.
Driving home later in the day, we saw either the same group or another equally large one sitting in a farmer's field looking for their diner. This is the new pattern. These geese will stay and forage the fields in the early mornings and evenings until January. They'll return to the lake during the day. Once the water freezes over most will reluctantly fly further south, but a few die-hards will stick it through the winter before re-joining the flocks for the Spring flight north.
Needless to say not many farmers are happy with their uninvited diner guests...
Posted by Michael at 7:36 PM

We see thousands of geese each year on their way to and from. Usually a couple days in the fall they all seem to be outside my bedroom window. (yep, cornfield. . ) Interestingly the last 5 to 10 years or so we've had more and more just stay in the area each year. They seem to be deciding it's just not cold enough to justify the flight south any longer. :)

Yup, both Canada geese and snow geese are sticking around and in some areas are becoming a serious nuisense. When I lived up north I developed a taste for geese, so perhaps I should get another freezer...

nice to get out out for a paddle with the family, looks like you had a nice day for it.
we get canada geese landing in the fields around here, but they don't stay.

Some one should teach you how to spell dinner.