Going up the Creeks 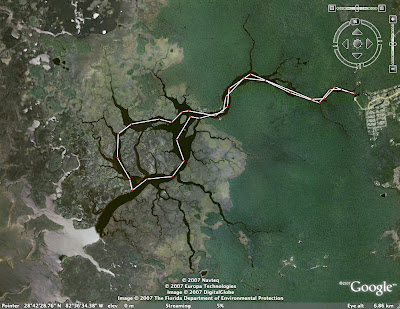 The Google image above shows the Chassahowitzka River on Florida's west coast and one of my paddling routes. 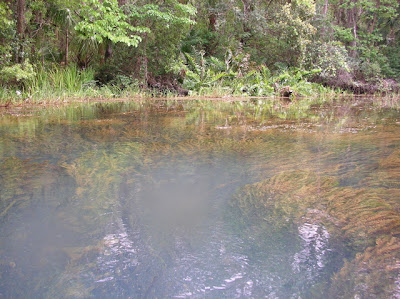 It's a spring-fed river, meaning that each of the little tributaries begins at a spring where clear, warm water bubbles up from the ground from a crack or hole seen in the picture to the left. Often the volume of the flow is enough to create considerable current requiring one to continue paddling just to maintain one's position at the spring itself. 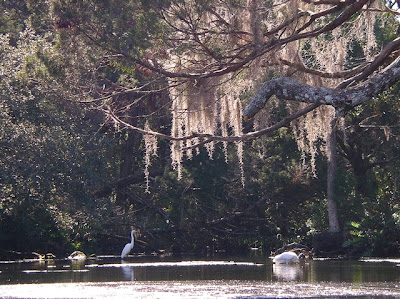 The green area on the right of the map image is forest covered with a variety of tropical trees and other plants. It is thick and lush, not the kind of place a person would want to try walking through. It is too thick, wet and swampy. Paddling the side creeks, however is easy and filled with an incredible variety of flora and fauna both in the water and on . I paddled several of them more than once and each time saw something new and, to me, unexpected. 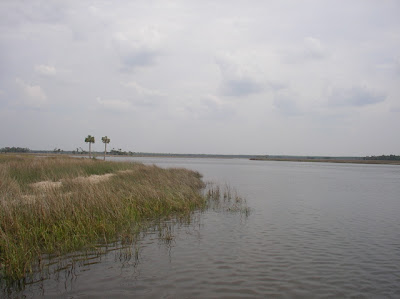 The brown areas on the left side of the map image is grass. The transition is abrupt and total. Suddenly there is an open horizon with waterways leading in many directions. It is no place to wander without a good map and compass! It is also an area where a paddling trail exists so that one can move along the coast from place to place. The trail is not marked on the ground, but it is shown on the map I had as a dotted line. Again the marsh grasses are teeming with wildlife including alligators, snakes and a variety of wading birds with manatees feeding in the waters. Large fish can often be seen rolling on the surface or jumping in the air. 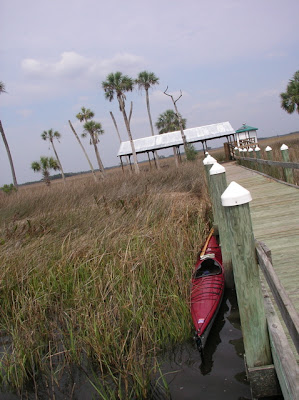 The Chassahowitzka area is a 'nature preserve' which is slowly being developed for visitors. The picture above is of a small picnic area containing a dock, a covered area and a solar powered toilet. Over-nighting is not permitted, but I suspect it has been used in the past... All in all, the area is a fascinating one which is best explored by a small boat like a kayak which can peek into the many little side creeks without disturbing much of anything.

There is a third environment in this area, the mangrove islands. These form the outermost islands before one is on the open Gulf of Mexico. I didn't explore these this year, but they too are well worth the effort it takes to visit. It's always nice to leave a little something for 'next time', wouldn't you agree?
Posted by Michael at 9:24 AM

That looks so beautiful and WARM!

I want to be there now.

it does look fabulous. and definatley interesting with all its wee nooks and crannys to get into, love the dock, is it a freestanding thing? in the middle of nowhere?

Good stuff, Michael. Those springs are connected by a vast network of under ground caves which have been seen on National Geographic and Discovery Channel specials. Interesting area.

Love the story, Michael. Thanks!