If you live in the high latitudes, say above 60°N, you'll no doubt be taking advantage of the longer days you're beginning to have. The further north you live, the more night-time is switching into daytime. Some people will soon be getting no night at all! The longer day provides lots of time for these lucky people to get out on the land to look for dinner and just enjoying life. 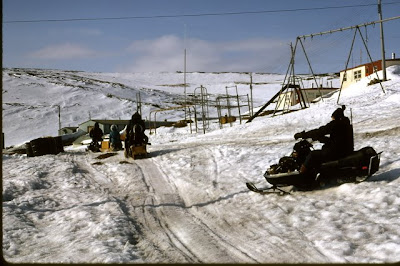 In this series of pictures taken in Kangirsuk in the Spring of 1972, a bunch of us are heading out for a day 'on the land' as we called it. The snow has been melting in the warm temperatures so some people would remove the cowling from their SkiDoos to aid in cooling, especially going up hills or when towing a sled. For others, it was a matter of being 'cool' in both senses of that word. 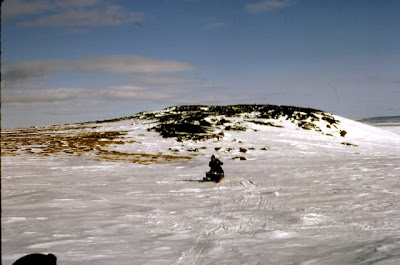 The first task was to climb up the hills off the river and head inland. It wasn't unusual to find small flocks of ptarmigan, small grouse-like birds that buried themselves in the snow up to a dozen or so at a time, white arctic hare in groups of two or three and solitary foxes out on the tundra. The small songbirds had also been returning, so there was always lots of wild-life to be found. 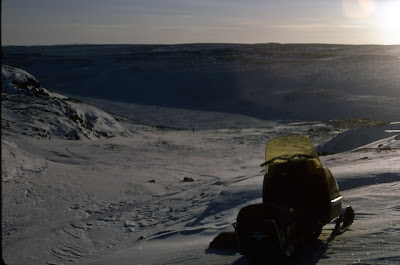 We used to drive around for hours, roaring our machines up hillsides, jumping off snow-drifts, generally enjoying being able to freely explore after a winter spent mostly indoors or dressed in warm, bulky clothing when we were out. We used to laugh about the high price of gas back then and be thankful we weren't driving cars. Today, we pay almost three times as much for gas to power our cars and we wonder whether we ought to be polluting the planet when out joy-riding. The joke has returned to mock us...
Posted by Michael at 12:21 PM