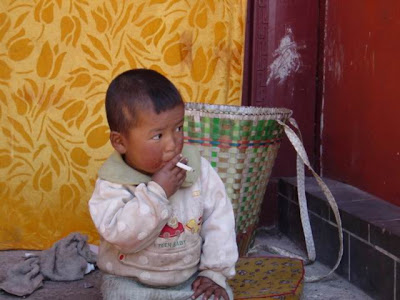 Have you been watching the Olympics instead of reading my blog? Naughty you! On the other hand, maybe you're better off. You could be out paddling and risking a 'quick death'!

If you've been watching the scene in Beijing, then the air quality will give you pause. It isn't the only Chinese city to have air quality 'issues', but it is one of the worst. I understand they are doing everything they can to improve the situation, but you can't help but think a lot of people are presently participating in their own slow death just by being there.

Still, it is clear that dying slowly by participating in an Olympic sport - or smoking like our little friend above - is more socially acceptible than dying relatively quickly by drowning while out paddling. It seems regulators don't like sudden unexpected deaths. Everything is done to ban people from indulging in those 'dangerous' activities. Far better to slowly die from poor air quality or from smoking, an activity which is still tolerated, if not actually advertised. But then, when did you see kayaking advertised in the mass media?

Photo from 'www.dellanave.com'
Posted by Michael at 1:34 PM

Thanks for cheering me up...I needed that :)

Just a thought...don't forget those for whom slow death is equally unacceptable so they opt for euthanasia. What a world!

I'm afraid I've been too busy to watch any of the Olympics. and my Nordkapp is sold, so I may not get the chance to drown......well I will if my shoulder, tennis elbow, lower back problems(did somebody mention euthanasia?)recover to a usable level, er...they're not keeping me off the horse however. the Anas Acuta awaits its minor repairs for those future paddling days to come. and I'm waiting for it to stop raining.....