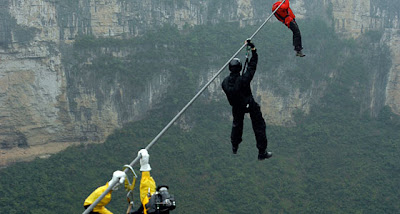 A few days ago I attended the Banff Mountain Film Festival. I think I've been attending for about five years now. Over those years, there have been some truly memorable films of adventures in often exotic locations, although few tour films have involved seakayakers. As I left to go home I began to wonder what criteria are used when choosing the films both for awards as well as those which travel the Festival route around the world.

Certainly we're into 'extreme sports' these days so danger and near death thrills factor into the decisions. Exotic locations also seems important and does improve the visuals at least at first glance. Still, there needs to be something more, but what?

When I think of the films which have moved me over the years, I suddenly realised that the key was the 'human story'. Films which open you into another person's world, which get you to feel the emotion of being with the characters on the screen, seems to be the key or at least, one of them. Seeing the emotional and physical changes which take place as the adventure unfolds is what makes the film memorable. Simply showing one incredible camera shot after another isn't enough, nor is 'interviewing' the people involved. It won't last in your memory or move the viewer to think further or feel deeply.

The lack of much development in this key element in this year's tour choices, left me with a flat feeling as I left the theater. Great films, amazing stunts, super locales, but nothing really memorable. The films did make me think about the making of my own videos and forced me to wonder how to get that key story element into them. Hmmmm...

Photo from Journey to the Center by Jens Hoffman
Posted by Michael at 10:49 AM

Hello Michael, this is a very interesting topic.

Like you, I have come away from some screenings of adventure films feeling strangely unmoved and indeed sometimes even dissatisfied. I couldn't really explain why but you have hit the nail on the head!

I found "Touching the Void" to be a rally excellent film. (It is more than the typical film festival production.) I had read the book first and enjoyed that but I was not expecting the film to be able to recapture the human drama. However, it did and as you say, that is the key to its success!

Might it be that as we get older and have seen much and done much that the gap between what is ordinary (for us) and the amazing gets narrower?

Well: if you want a human factor: visit Himalaya Film Festival in The Netherlands: www.himalayafilmfestival.nl