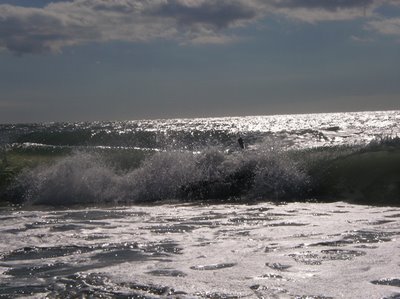 Two things caught my attention while reading Justine Curgenven's recent SeaKayaker magasine piece on going around Tasmania. I suppose we see certain well known paddlers as a bit more than human, so I found it interesting that she found herself tired to the point that, "after 30 days of paddling. The constant exercise, getting up early, always being mentally alert..." was enough. Interestingly it happened just as she rounded the last cape and the end was almost in sight. Obviously undertaking large challenges takes a lot out of a person, no matter who you are. Thirty days of continual high energy output is 30 days, even if a few of them are spent on the beach when one might think one is reating up. It's something many people setting out don't pay much attention to, but it appears to be very real and if referred to by long distance paddlers more than once. So training and getting in shape both mentally and physically for a trip of this sort is necessarily part of the 'kit' so to speak.

The other item in her article was the close call which happened when a rogue wave pitched Gemma out of her boat and separated her from it in cold water. Acting quickly, Gemma and her boat were both rescued, but imagine had she been on a solo voyage! The ending might have been quite different. I have frequently paddled alone and not given it too much thought, but this makes me wonder. I don't find myself in big water like that found off Tasmania, but I can think of several instances from my outings last summer, when I began to wonder if I wasn't out there all by myself in a situation over my head. Fortunately I escaped the hands of fate on those occasions, but will I be as lucky next time out?

I'm meeting up with my 'Frost-biter' kayaking friends this weekend. We've got a big multi-week trip in mind for the coming summer and in an area known for its waves and rocky beaches. It will be good to know I will be with strong and experienced paddlers. Now I just have to think about how to deal with the 'final cape syndrome', the one where fatigue suddenly takes control and keeps you on the beach.
Posted by Michael at 2:43 PM

hope you have nice time away! thermals on!