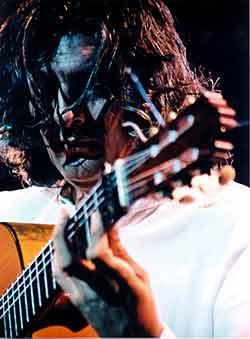 I've mentioned before that I'm a student of the flamenco guitar. Naturally I have a few 'heros' I'd like to be able to imitate. My top flamenco is known as Moraito Chico, a guy from Jerez de la Frontera, right up against the southern border of Spain and Portugal on the Atlantic ocean. He was born in 1955 into a gypsy family, so flamenco was in his blood and playing guitar was like learning to walk, just taken for granted. He has accompanied many others but has very few recordings to his own credit. I was happy to see his name came up on a YouTube.com search the other day. Here's some of what I discovered (It helps if you have Hi-Speed internet here...).

The most interesting video is of a young Moraito playing a Bulerias by in a wine cellar setting. This little video appears to have been made maybe 20 years ago or so. The great part is to see him literally rolling and bouncing in his chair with the music as he plays it. He is so into what he's doing. I also watched the girl's shoulders as they gave little upward jerks now and then to the under-currents in the music, that movement being so typical of flamencos. Really fun. The cigarette in the guitar head is so old as well! I can't imagine flamencos still smoke, but of course they probably still do... They're 'gitanos' after all.

A number of other things also come up in the search results. Someone has put up clips from his lesson video which is too bad as it's readily available if you want it. Probably the most interesting clips other than the one mentioned above are those of other people playing his music. One is called Flamenco Guitar and Dance'. Here a Polish guitarist plays for a dancer and is accompanied by a guy doing 'palmas', the typical rhythmic clapping done in flamenco music. This is worth a watch as the playing is good and the camera does a good job as well. Flamenco music is foremost for the song, with the dance next and then all else being secondary.

Next check out the fat Spanish kid called MoRaiToXiCo playing a 'Buleria' of Moraito's. This kid can really play ! He is sometimes seen with other young people and it's fun to watch their reactions. For example, watch the shoulder action of the guy doing 'palmas' in the piece called 'Bulerias'. Just like the girl we saw in the first piece, but even more accentuated: culture moving ahead! So fun to see. He has several other videos up, some as good, some of poorer quality, but all are worth listening to. He's very good and so droll!

Anyway, that's a peek into an unknown world for some, but a sound that's bounced around in my head for years. The very first vinyl record I ever bought was of Esteban Sanlucar playing flamenco guitar. I still listen to it although I've transfered it to CD format for convenience these days.

Here's a couple other sites you can visit for more information of Moraito Chico:

http://www.flamenco-world.com/artists/moraito/moraito.htm
Posted by Michael at 8:54 PM

thought I reconised the name but fromt eh phot I don't think I know him
http://www.seapaddler.co.uk/DouglasWilcox.htm
seems like a sound guy though.

just came back to listen to these now that broadband is installed, brilliant guitar playing and I love the dancer.
used to take about 5 minues to load one up and now its instant.