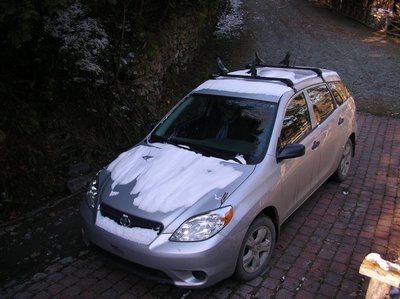 In a way, a whole new paddling season begins once the snow arrives. So far we have only had a 'dusting' of the stuff, but that will soon change. It means driving to the put-in will become a challenge, depending on how well the roads have been cleared. Changing into paddling gear will need to be well rehearsed with everything close at hand in order to avoid getting too chilled. The launch itself will eventually involve a turtle-walk over the ice before breaking through into liquid water. Returning will present other problems, as well getting the slippery, ice-coated boat into the roof cradles. 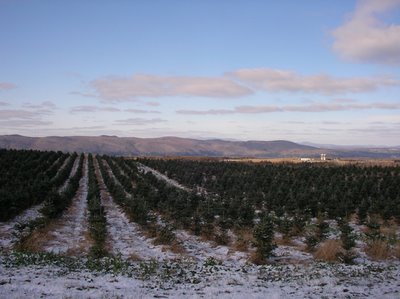 I went over to have a look at Lake Massawippi today, first clearing the newly fallen snow off the car windows. I stopped along the way to have a look at one of the nearby Christmas tree plantations. I noticed last week that they're beginning to ship this year's trees off to markets around the world. 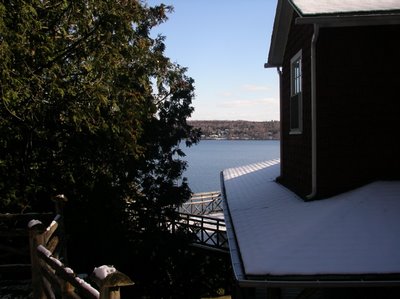 Peeking past the cottage, the water looked blue and inviting despite the -2°C temperature. I'd better get out there and paddle! There's only another month of kayaking until the lake becomes too difficult to get out on with only a small area in the middle remaining unfrozen.
Posted by Michael at 1:47 PM

it sounds like it would be very difficult getting back out of a lake that is frozen all round the edges. I have no recall of this being discussed in any kayaking syllabus.

Although Scotland is quite far north, and snow falls on land, the seas rarely freeze. The Gulf Stream keeps us warm and very often the winter sea temperature is warmer than the air temperature. It is coldest in March when it falls to 7C in the sea lochs and 9C in open water. Coastal water temps have incresed by 1C and offshore by 1.5C since the 70's.

One unexpected consequence of global warming may be that the Gulf Stream switches off, in which case Scottish winters will be colder with frozen seas.
Douglas

Douglas, when the Gulf Stream switches off, I'll come over and teach you how to hunt seals on the ice! In the meantime, how are your harpooning skills coming alone? ;-)